Where have you gone Leonid Brezhnev 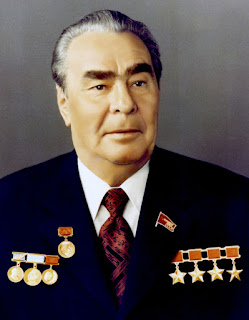 Our leftists turn their lonely eyes to you.

Rod Dreher posts a story about the NSB board sending that letter to President Biden, comparing parents trying to get straight answers at school board meetings to domestic terrorists.  Furthermore, they want the Feds to step in and do something about it.   Dreher's post is from an East European anticommunist who notices the similarity between that move and the move for old time communists asking the USSR movers and shakers to come in and help.

That's common to what I heard in my years sojourning with the Orthodox.  If I learned anything in those six years, it's that Americans have no clue what is going on in the world today because our media outlets - both sides really - paint false pictures about the people and events in our world, when they bother to mention them at all.

Likewise, I met several who grew up behind the Iron Curtain.  Orthodox after all.  One was a fascinating gentleman who, along with his wife, is a professor at one of our big state universities.  More than once he pointed to the developments in our country and compared them alarmingly to what he saw as a youngster when the Soviets came storming in to take over.  Many of the things going on, including universities asking students to 'watch' other students or professors, were straight out of the playbook of the Iron Curtain wonderland.

Of course per my sons in college, many students today believe all that 'Evil Empire' rubbish was American war propaganda.  Turns out the USSR wasn't bad at all.  The whole Gulag Archipelago was just a bunch of lies perpetrated by people on the Evil American Empire payroll.  Those dissidents speaking of the horrors of the USSR being liars who made it up in order to cash in on fame and celebrity in the years when the USA was the only Evil Empire on the block.  My sons have done no actual survey, but from their classroom discussions and social media platforms at college, they wager about 1/3 of the students believe that.

Which isn't hard to believe.  When I became Catholic in 2006, I got a job at a book publisher.  A fine young lady was also working there as she went to OSU for her MA degree.  She had an undergrad degree from Boston College.   She was very adamant that the whole Cold War was a giant American conspiracy for Wall Street and our Military Complex.  Turns out the Soviets were just misunderstood beatniks wanting peace, love and John Lennon songs.  That was 2006.  And she was working on a Masters degree.

So it's not hard to see, while there are traces of Nazi styled race hate, ethnic cleansing and mass extermination of undesirables among the Left, you can't help but notice strong communist flavors just the same.  And yet how many Christians are abandoning the faith to join it.  Truly ours will be a generation used by future generations as a cautionary tale.