Or is this just partisan bilge: 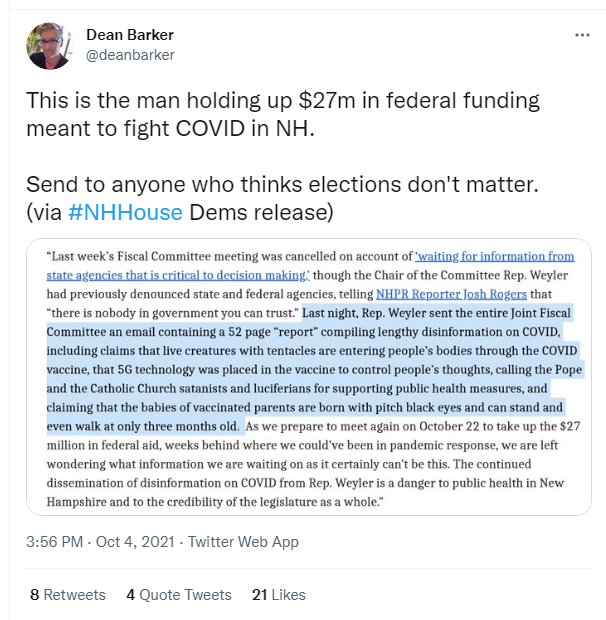 I've looked under Ken Weyler and anything to do with a 52 page document, and apart from the statement by a liberal democrat Mary Jane Wallner, I've seen no news stories about it.  I've looked.  Perhaps this story could help.  It's a local rag and does speak of the blowup between the Dems and Welyer.

But no mention of 52 page anything. That story was dated Sept. 23, 2021.  Much of the  news I've found centers more on Weyler being a key block to Democrat budget agendas.  Given how quickly darlings of the Left are now being vilified for standing in Biden's way, I have to wonder.

Nonetheless, I've found nothing at all about a 52 page document sent by Weyler.  I went to stories about  Wallner and found nothing saying she made the claim at all.  Perhaps she did.  Perhaps he did.  Maybe the above Twitter post is spot on.

I've just found nothing at all about any of it, other than Weyler is in hot water for bucking the dominant narratives about vaccines and Dems are trying to get rid of him.   No document.  No tentacle monster claims.  Just that the scuff over his claims about percentages of vaccinated in hospitals and problems with the vaccines.  I wonder if anyone else has found anything.

I should add I'm not saying that the Twitter post itself is a false story and there was no such thing.  Or that the Wallner never made such a claim.  Or that Weyler - an MIT grad - never actually sent any such document, and the above image is a lie.  Heaven forfend.

I'd just like to find some actual information, a copy of the actual document (all 52 pages if possible), and see exactly what was written and hear the parties involved actually corroborate that it all happened as the Twitter post says.

But that's just me.