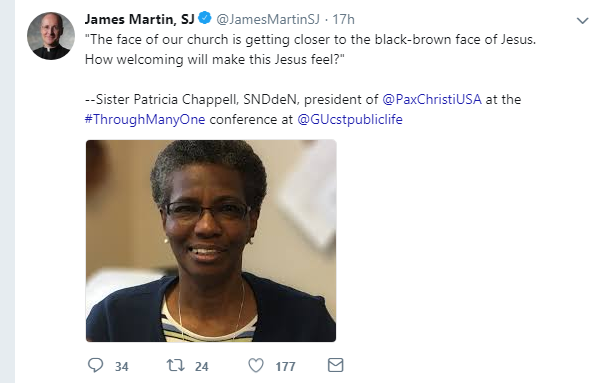 The whole 'black Jesus cares about skin color' is hardly unique to Fr. Martin.  It's actually not fair to pick on this, since many Christian leaders appear to embrace the idea that white Christianity is bad Christianity, versus black Christianity or other non-white Christianity that will always be the good kind.

It's wrong.  In fact, it's awfully 'protestant' in its 'white Babylonian captivity' mentality.  And it's racist to merely take the racist attitudes Christians may have had in the past regarding non-whites and apply them to whites today.

Compared to that, there's this:

Note the comments if you go to the Youtube channel.  Multiple people, including self-proclaimed atheists (take it for what it's worth, it's the internet) are stunned and appreciate the candor and honesty of his point in the sermon.

I won't quibble about how black or not Jesus was.  The point is to cut through the 'he's my Jesus, no he's mine' mentality today and remind us that Jesus belongs to the world - including to blacks as well as whites, who God saw fit to move the Church through in its many centuries of growth in the world.

The Church is at its best when it proclaims truth to the world.  When it changes the truth in order to get along with the world, it seldom makes an impact.

For generations the Church has been following the world around like a yap dog waiting for the master to toss a few scraps from the table.  I think it's time the Church get back in the driver's seat and not care what the world thinks of us, but simply proclaim Truth.  I think we'd be surprised at the results.