In keeping with my momentary purgatorial run through the horror of New Prolife Catholic Twitter posts, I found another gem: 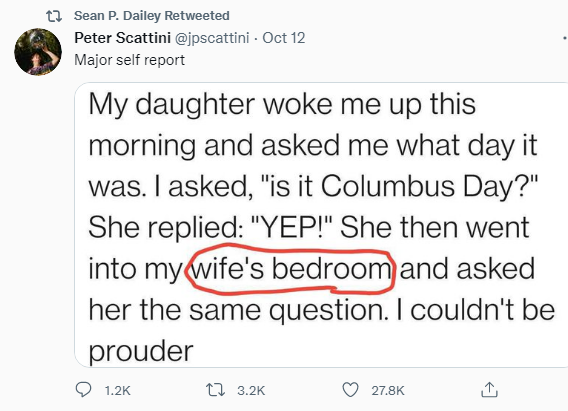 I don't get it.  Well, I do get it, and that's the sad part.  The point is to make fun of the fact that the wife is in a different bedroom.  You know.  Some old puritan fundi hacks sleeping apart because crazy puritan fundi hacks are the only types who would celebrate Columbus Day!  Bwa ha ha ha ha!

But what of it?  First, maybe they sleep better apart.  Or there could be medical reasons.  That does happen.  My sister had to sleep in a different room than her late husband in the last years of his life.  Or there could be other reasons.  Maybe the wife has a separate bedroom while a newborn lays in a crib beside the bed because their master bedroom won't work.

There are literally dozens, if not hundreds, of reasons a wife might be in a different bedroom.  Some may be reasons they have no control over.  We don't know.  Even if it was their choice just because, who are we to care?  Dare I say, who are we to judge?

Or is this the type of thing New Prolife Catholics love to judge in order to avoid judging things like the mass extermination of undesirables by the tens of millions in order to sustain a blasphemous sex and drugs culture during the AIDS pandemic?  Could be.  You never know.

Nonetheless, the thing more stupid than the stupid of the Twitter post is that those involved with posting and sharing it seem to think they just spotted that landing of rhetorical awesome.  The only thing worse than an arrogant person is an arrogant fool surrounded by like thinking fools.  And the above Twitter post demonstrates that nicely.

Email ThisBlogThis!Share to TwitterShare to FacebookShare to Pinterest
Labels: Doing the dumb thing, Liberal "Tolerance", Stupid is as Stupid is