Reflections: Amazon for Commodore 64 - When all things are new 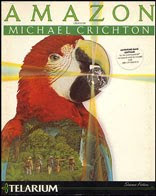 I miss Michael Crichton. First, the man never met a scientific breakthrough that he didn't fear. Because of this, he was a great antidote to all the science worship in our modern world. Despite the fact that science and innovation brought forth the very forces that scientists now say could wipe out life on our planet, despite living in the shadow of the mushroom cloud and the gas chambers, we still tend to think scientists are one up on the evolutionary scale, never wrong, and anything they give us will only be good cuz nothing bad could come from science. Crichton, God rest his soul, did what he could to warn us of such blind faith in science.

Second, the man was creative. He wrote some good novels. Even if some, like Congo, that relied so heavily on now outdated innovations, can come off as dated, they are still fun reads. He managed to combine a keen scientific intellect with a vivid and wild imagination. And not just books or movies. He was also a fair hand at video games. One computer game that is. Released in 1984, my Junior and Senior years of high school, the game Amazon stands as one of the best examples of what we thought computer and video games would eventually yield. 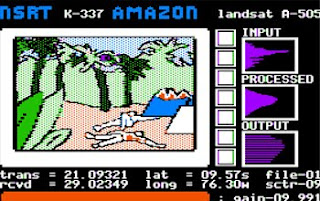 Sure, it looks dated today. Duh. I'm often taken by the fact that the Internet seems to have bred an entire generation of critics who can't imagine why Ancient Egypt didn't have cool CGI images in their tombs. Somehow it's telescoped our thinking when it comes to the things of the past, producing a contempt for things that came before. But if we can set such silliness aside, and look at the game in its context, we can see why it was so well received, so successful, and quite frankly, so darn fun.
The preimse was based, albeit loosely, on his book Congo. You were an agent who was dropped in the middle of the Amazon in order to find a lost ruin, while also following hard on the demise of an expedition that had preceded you. The game opens, in fact, with a pretty clever set of graphics meant to illustrate the previous party's demise. You literally watch as the cameras pan, until a native slowly moves toward the lens and Zap! Everything goes blank.
After a run through the city to get to the airport, you're off. Once dropped in the Amazon itself, you must dodge jaguars, hostile natives, hostile enemies, scrounging monkeys, and devious traps set in an ancient pre-Colombian ruin. The game itself bounces from a 3D POV approach, moving through hours of screen with nothing but jungle leaves, to arcade style shoot'em ups. You were 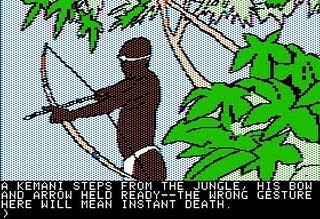 given an actual map to plot your course - and you had better do so. You had other items as well, and had to solve puzzles, find your way through endless jungle (before the term was renamed Rain Forest), and eventually make it to the destination without dying. You could always go back and reload, but this was on a Commodore 64. The reload function took a month of Sundays.
Now maybe I'm just an old crank, but I can't help but feel that at least some of the potential creativity and possible avenues that computer games could have gone didn't pan out. Though limited to C64 technology, the game packed quite a punch. You interacted, you had to use a map, you had multiple game types. And the map was part of the game, not a supplement! You ignored it at your own risk. But today, the games are pretty much the same: sports, strategy, simulation, POV games and RPGs, they all pretty much follow the same formula. You play, save, reload, play, save reload. The graphics are at times stunning, but there is almost a simplicity to it all. Through sheer repetitiveness, you will get through it without doing much but the same thing over, and over, and over again. You put a game in, and it will be more or less the same thing until it is through.
When I think of how much variety was included in the game Amazon, the quality of production, the added elements, the variety of gameplay in a game so crude, I can't help but think if the creativity had advanced in proportion with technology, the games today would be beyond our imagination, and not merely cut from one of a half dozen molds that rely on sameness to appeal to a mass audience.
All of this is to say I got to thinking. There was a time, as in most new technologies, that folks imagine there is no limit. The sky maybe, but otherwise no limit, once we get going, to what a new invention will bring. Sometimes we may look around and think look at everything we have! Look at how everything is brilliant! And yet there always ends up being a plateau, a leveling off of what we thought was possible by what becomes possible. What we, in the early 80s, believed computer games and video games could be in twenty years has not really happened. The graphics are certainly stunning. But beyond that, not much else. It's pretty much pong on steroids. Maybe that's why we obsess with getting more of the latest. We always hope that the next one will scratch the itch we have for more than just doing the same old same old. And yet, when it comes to technology at least, even the new eventually becomes the same old down the road. And we look back, realizing that so many of our expectations ultimately fell short. As much as we have, we imagined we would have so much more. Maybe in a thousand years, but never in the lifetime of one's imagination.
Posted by David Griffey at 4:19 PM