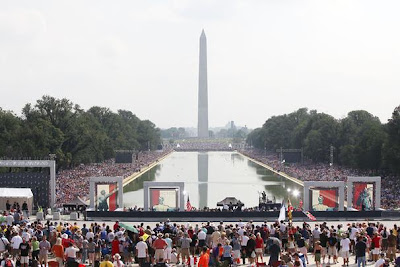 This weekend, Glenn Beck hosted a gathering at Washington D.C. on the anniversary of the great civil rights march of 1963. Never mind stepping on sacred ground by daring to touch something hallowed by Secular America's only allowable Patron Saint. That's for another time.

My question is, why Glenn Beck? Most folks who have any level of training in subjects such as history, theology, or philosophy chafe at the things he says and how he says them. Ironically, his approach to history (one of my fields) is no better than those rascally liberal scholar types he often mocks. His understanding of Christian theology in general, and denominations not affiliated with his current Mormon faith in particular, is often quite amiss.

In addition, he gets on my nerves. His style is, well, bothersome. He reminds me of the boisterous and obnoxious cousin who comes to family gatherings, seizes the conversation, and begins spouting off ludicrous tales and fanciful opinions in such a way that embarrasses everyone in the room.

So why would tens of thousands show up to hear him? Because, I think, if you strip away the ludicrous logic behind his historical conspiracy theories, if you put aside his insistence that a person can be both a Nazi and a Communist, if you ignore his overbearing way of saying things, he is hitting a chord in the minds of at least some Americans. He is saying what they think on a broad level.

Christian progressives are, like liberalism itself, fine with a declining America. They don't want it to crumble or anything, but don't see it reduced to the level of other countries as a bad thing. Many Christian conservatives, including not a few Catholic conservatives, seem to take the Qumran approach: we're heading to heaven and America is pagan hedonism now, so don't worry about it.

There are Americans who don't see it that way, who see the good in America and its past, and acknowledge there are problems that can still be fixed. They see the hedonism, narcissism, debauchery and godlessness yet believe it can be changed. They may, to varying degrees, admit the sins of America's past, but don't see those as reasons to roll over and play the 90 pound weakling to other cultures - cultures whose sins they are not afraid to point out. They understand that not everything in America's past was good, but see the movement of Secular Progressivism as a major threat to the country and world that their children and grandchildren will inherit.

And it's to these folks that Beck speaks. Even if he gets his facts wrong, and even though his logic can sometimes be twisted, the general message of 'reclaim America's goodness, be proud, embrace God and God ordained morality' resonates - because no one else is saying it that way. Even such noted right wing commentators as Bill O'Reilly waver between conservative/libertarian and 'who's to say morality is absolute?' Many others, again in the Catholic community, following that age old love/hate relationship the Church has had with America, having a 'it dies, then it dies' approach. Beck is one who, on the surface and in the most general way, is saying America can be saved, we can reclaim what was good, and it's worth fighting for because we do have enemies in the world, and it isn't always us. It may be that last part of the statement, if nothing else, that sounds the sweetest in the ears of those who came by the tens of thousands to Washington over the weekend.

For if you are on the Titanic, who would catch your attention? The one sitting around pointing fingers at who is to blame, insisting he would have had more life boats, suggesting if the builder he worked for made the ship it would never have happened, suggesting they had their nerve being on such a luxury liner in the first place? Or the less than intelligent fellow in the doorway with a life jacket saying 'follow me and let's get to a boat'? Even if he ended up in a dead end passage flooding fast, it would seem a better option than sitting around listening to folks point finger after finger while finally asking for a glass of brandy to go down like gentlemen.
Posted by David Griffey at 5:28 AM