I sometimes see America and the World as Rocky and Mr. T - before the first fight 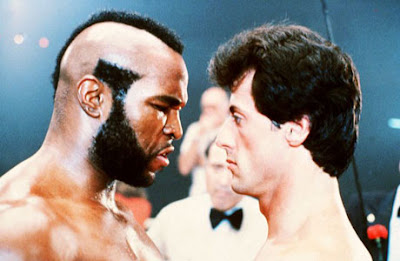 An interesting editorial on Time.com. It's obvious the viewpoint of the author. One thing I found interesting, and I've seen this quoted a million times it seems, is the fact that Muslims now don't support suicide bombings the way they did:

A study by the Pew Research Center earlier this year found that support in Muslim countries for suicide bombings has fallen precipitously from post-9/11 levels. One-third of Pakistanis believed terrorism was justified in 2002; now just 8% do.

Three things. First, it only says Pakistanis have had a lowered rate of support for suicide bombings. Does this apply to the entire Muslim world? Are the stats similar? Why mention them as opposed to Muslims as a whole?
Second, is 8% a good amount? If it were only 8% of Muslims, as the article seems to want to suggest this poll would indicate, then 104 million Muslims still support terrorism. Correct me if I'm wrong, but that doesn't help me sleep well.

Finally, why the change? The fact seems, before 9/11 most terrorism was aimed at non-Muslim targets, primarily Israel with the odd passenger jet thrown in. Since 9/11 and the Iraq war, the bulk of attacks have been against fellow Muslims. For all the billions killed and blamed on Bush's policies, most deaths have been at the hands of Muslim insurgents. And most deaths have been fellow Muslims. How many Mosques have been attacked, not by racist, out of control Americans, but by Muslim extremists? Is that why Muslims support it less? Is it in general principle? Why? Certainly we can't ignore the carnage that Muslims have visited on one another in reviewing the poll numbers. Can we?

These are thing I think about. In America, we have been conditioned to easily accept the worst possible interpretation of our own motives, the motives of our leaders, the motives of our culture. We find it difficult to look at other cultures, nations, peoples and say, "You're wrong! It's your fault." Generations of focusing on the sins of our own past, and believing that without our cultural influence the world wouldn't have been half bad, have brought us to a point where it's almost unfathomable to think all of this could be anything other than Muslims seeing the light for the purest reasons, while America's meddling in international affairs is the main cause of problems. Forget suggesting that, had America done everything right, there could still be a tendency by other cultures to view us in hostile ways.

It all reminds me of those polls a few years ago, from Pew Research to UN studies and other surveys, that found Americans have little to fear from Muslims, since only 10% of those studied support Islamic terrorism against the West. I always wondered what the other 90% thought. Did all 90% want to live like good Western post-moderns? Did some want to conquer the world for Islam but saw terrorism as cowardly? Did others have a mesh of feelings somewhere in between? I don't know. No one asked, and no one told. All we were told was that only 10% of Muslims supported the full and unchecked mass slaughter of all Westerners. And in some bizarre twist of logic, the idea that 130 million people in the world supported the death of me and my family at all cost was supposed to put me at ease.

Such have been the strange attempts by a soft and irresolute America continuing to live its life of pizza and beer and reality shows in the face of a changing, and threatening, world.
Posted by David Griffey at 7:20 AM