The emerging darkness of post-liberalism 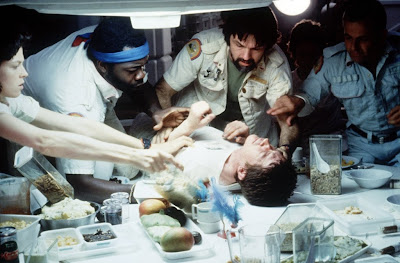 Huffpost commenters continue to demonstrate the monstrous aberration that is the post-modern secular Left. Not to be confused with classic liberalism, a movement that could boast at least some aspects of Christian justice and social teaching, with a concern for humility of the intellect and love of one's neighbor. This thing bursts from the corpse of classical liberalism like the alien bursting from John Hurt's chest; a movement increasingly evil, filled with hate, loathing, contempt, self-righteous arrogance, and an emerging lust for power, censorship, and - when all else fails - extermination of those deemed unworthy (typically those who fail to conform to the dogmas of the post-liberal left). It is a parasite, devouring the last vestiges of dignity of that once noble experiment known as liberalism. And liberalism's greatest sin will no doubt be its refusal to see the evil in Kane's child.
Check out the comments on the story of Christian doctors murdered in Afghanistan. The easiest comments to read are those exploiting this for a chance score points against America's policies in the Middle East. The worst ones gladly put the blame on the victims for peddling their "fairy tales" (apparently Christians deserve what they get because they are Christians). Given that the Huffpost ostensibly deletes posts that cross the line, and seeing the nature of those posted, it makes one's blood run cold to imagine what the deleted posts said.
I'm aware, of course, that such hatred, arrogance, and willingness to scoff at the suffering of those without stars on their bellies is not limited to the 'post-liberal Left.' But unlike most Western movements of hatred, it is not confined to isolated radicals holed up in log cabins at the foothills of the Rockies. Rather, it is boasted of and increasingly endorsed by (if not promoted by) leaders, scholars, celebrities, and others who have the eyes and ears of society at their beck and call:

"[T]he very ideal of religious tolerance—born of the notion that every human being should be free to believe whatever he wants about God—is one of the principal forces driving us toward the abyss." - Sam Harris, best selling author, doctoral student at Harvard, beloved of the modern atheism movement, who has yearned for a day when we can end tolerance of religions he hates.
Posted by David Griffey at 11:45 AM

Email ThisBlogThis!Share to TwitterShare to FacebookShare to Pinterest
Labels: Modern anti-religionism, The End of Liberalism