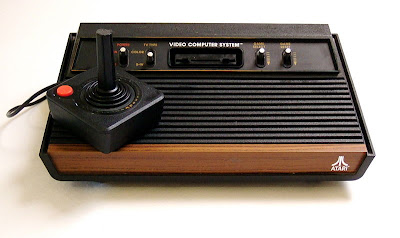 If I had to struggle through Latin in graduate school, by goodness I'm going to use it. Annus mirabilis means great year. It means year of wonders or year of miracles. Far from religious connotations, I saw a post the other day about the old Atari game of my youth. This was the BB-Gun (and we all know what that means) present for Christmas back in 1980, one of my greatest Annus mirabili. Space Invaders had been released, and I wanted nothing other than Atari and Space Invaders. Santa, being a good elf, fulfilled my request, and I settled down for many hours of saving the world from alien invaders.

That wasn't all I remembered. Suddenly, I was in eighth grade again - one of the best years of my life - beginning to move from childhood to adulthood. Old toys were sitting, collecting dust with increased frequency as they could no longer hold my interest. Girls were beginning to appear less offensive. Going places with my best friend was more common, and we spent many days hanging out at colleges while his Mom attended classes, toilet papering and soaping windows on a football Friday night on Halloween, snowball fights in a bowling alley parking lot.


And then other great years came to mind. In what felt like hours of reflecting, I remembered my fifth and sixth grade years, my high school Junior year, fall semesters my freshman and junior years at Ohio State. The smells, the sounds, the scenery all became as vivid as the scenes outside my window right now. I also remembered, more vaguely because the memories even now are beginning to fade into the mists of time, pleasant years of my youngest days. But through them all, that year, 1980, will remain large in my list of wondrous years.

That got me to thinking, as I am wont to do, of how a simple picture, or reference, or even smell, can bring back memories like that, and suddenly I'm no longer here, worrying about job and fatherhood, being a good husband or provider (or lack thereof), or the concerns of aging parents, Alzheimer's, recessions, a fading America, a scandal-ridden Church, or any one of a thousand things that eat away at the child-like joys of yesteryear.

Instead, I'm transported back, and can see the old, blue beanbag chair, the new TV complete with round dials for navigating thirteen channels, feel the plastic cartridge announcing the coveted title of Space Invaders as I push it into the console. It's quite amazing, the thing called memory. The things that set it off, the things that are special. The things we never really get rid of.

I think of that when I read passages in the New Testament that turn to the original Aramaic. The New Testament is in Greek, of course, though the spoken language of Jesus and his compatriots would have been Aramaic. Nonetheless, on a few occasions, the authors of the Gospels, and Paul himself, recount the Aramaic words of Jesus. He says abba, father. He cries out Eloi, Eloi, lama sabachthani from the cross, he holds a little girl's hand and says Talitha kum, and she rises from her own death.

The authors didn't have to use the original words. They could have translated them into Greek just like the rest of Jesus' teachings. But they didn't. Something about remembering him say those things in particular struck a nerve. And they wanted to repeat them, to remember them. They wanted to pass them down to the ages and try, however incompletely, to allow us a brief glimpse into the actual moment when God reached out and gave so much to us sinners.

Like me remembering that year of wonders so long ago, I can't help but wonder if the Apostles were putting their own nostalgia in, remembering that year way back, when the Messiah walked among us, and the carpenter's son simply held a child's hand and said, Talitha kum. That, no doubt, would cause anyone to think that it was, indeed, a very good year.
Posted by David Griffey at 12:53 PM