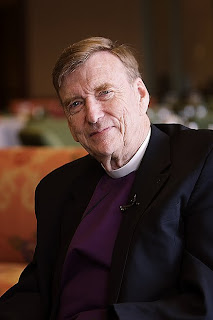 It depends on what you mean by Christianity. In some ways, many modern, progressive Christians have an almost Gnostic approach to the Faith. Immanent figures such as JohnShelby Spong and Bishop Gene Robinson act as though it's OK to be a Christian, as long as you see Christianity their way - the right way. For 2000 years, the Faith has been languishing in error; bigoted, sexist, homophobic, racist, anti-Semitic, anti-intellectual, wrong, dumb, violent. It's only now, with the rise of this enlightened generation, that we know the rights and wrongs of being Christian. Through the glories of critical scholarship, we now know the bulk of the Bible is myth, legend, and outright lies. We know the proper way to interpret the Scriptures - what little is left of value. And we can see the error of our ways and find true Enlightenment and, if you must, salvation. In fact, so close to an inner, secret Truth is this approach that it shouldn't be a shock that I knew several progressive ministers in my own pastoral days who had little problem with Gnosticism; some actually thought it brought much to the table.

That, of course, is the basis of much post-modern thought. There is an underlying 'surely, you don't disbelieve what we've said, do you?' approach in presenting various subjects. Proof is assumed to be out there, even if it needn't be provided. Are more Americans being violent against Muslims? Has there been violence against Muslims out of proportion of violence against other groups? Do we really know exactly why homosexuals are homosexuals? Do we actually know an unborn baby can't feel pain? Are we sure we have the right to define human life? Are we positive that religion was made up by cave people trying to understand why Woolly Mammoth dung smelled? Is there actual proof? Ask these questions, and there's a snort of derision, a 'you must not be in on the Truth' response. A subtle 'we don't need proof, because we know, and we know because we are' echo in what is said. An approach to knowledge that would certainly bring pride to the most fervent Gnostic thinker of two millennia ago. Which is why a wise pastor once said there are no new heresies, simply old ones repackaged.
Posted by David Griffey at 9:48 AM

Email ThisBlogThis!Share to TwitterShare to FacebookShare to Pinterest
Labels: Decline of the Christian West, Progressivism