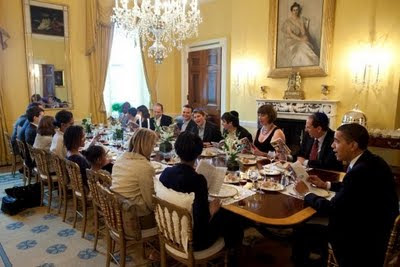 If Obama says he's a Christian, that's good enough for me. If folks don't take him at his word, then it is a question worth pondering: why? My guess is, his general behavior. Like Reagan before him, Obama has been pretty open about not spending too much time in the local church. Again, no problem. It's not how I would display my faith, but then President Obama is not me. Nor was Reagan. That doesn't mean I will heap scorn on his spiritual pilgrimage, just as I didn't on Reagan. And I've heard folks do both.

What it probably does indicate, assuming again that non-journalist Americans just aren't bunch of dolts, is that there is a disconnect in what people see and hear. If, for instance, President Obama told me he played football, not baseball, then I would believe him. Now, if I showed up to the football field every week, and he was never there, I might scratch my head and wonder. If he gave me a reason, say he's just too busy to play anymore, I'd be fine with that.
If, however, I began noticing him over on the baseball diamond every Thursday night, hanging with the players, talking with the coaches, and even tossing out a few pitches, I probably would not be too crazy to wonder what it all means.
A popular story a while back was that the Obamas didn't attend church services on Christmas because of security concerns (disrupting the service). Many pointed out he could have improvised, had some Christian leaders over for an impromptu service, something. Instead he spent time with the family. Fine. It's known he isn't spending much time at church. But when people start seeing him spend more time with Muslim leaders, copious amounts of time reaching out to Islam vs, say, Christianity, or openly and proudly attending important Islamic religious ceremonies, then I don't think we can be too bothered by those who then conclude there might be something worth wondering about.
Sure, he's probably a Christian as he says, but with some denominations declaring the New Testament a racist anti-Semitic document, and others willing to ordain atheists or Muslims as priests, let's face it, saying one is a Christian may not mean much at all in how that one ultimately sees the world of religion, if not the world in general.
Posted by David Griffey at 10:33 AM