From Protestant to Catholic 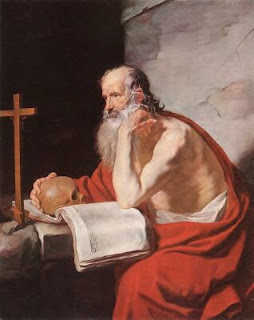 A Baptist minister once said that only an idiot would read 1 Peter 3:21 ("Corresponding to that, baptism now saves you-- not the removal of dirt from the flesh, but an appeal to God for a good conscience-- through the resurrection of Jesus Christ"), and think it says baptism saves us. Granted, there are plenty of arguments against using this passage alone to justify regenerative baptism (that is, baptism with muscles that actually takes part in the process of one's salvation). Its strange prose, context and structure allows for at least a handful of interpretations.

But that argument against 1 Peter 3:21 was what hit me. Certainly a person wouldn't be an idiot, despite the remonstrations of the good pastor, for reading 'baptism now saves us' and concluding baptism now saves us. It would take someone, somewhere, telling me NOT to see it that way to keep me from seeing it that way. It took an authority, a person, church, denomination, creed - something - to say 'when you read 1 Peter 3:21, don't get the idea that baptism saves us - because only faith in Christ saves us, which is how you are supposed to read 1 Peter 3:21.'

Fair enough. Perhaps that is the right way to read 1 Peter 3:21. But if it is, it will take an authority outside the Bible to tell me the correct interpretation. As a pastor, it dawned on me that leaning on such an extra-biblical authority was one of the main complaints Protestants had against Catholics: That Catholics had this big old Church telling them what to believe and how to read the Bible. Unlike Protestants who, apparently, had Protestant churches to tell us what to believe and how to read the Bible. Like so many things, this was one small brick in the wall between Protestantism and me.

I know, I know. Protestants explain this by insisting that any tradition is still subject to the Bible and can never be above Scripture. Problem is, Catholics also say that no teaching of the Church contradicts the revelations of Holy Scripture. Oh sure, Protestants in the know assure us they would throw out an interpretation if it contradicted the Bible. But it was increasingly hard for me to imagine that happening, especially since the contradictions could only be seen by dispensing with the interpretations that told them the interpretations were correct in the first place - which never happened (or it did, and that's where little denominations came from).

Email ThisBlogThis!Share to TwitterShare to FacebookShare to Pinterest
Labels: Catholic, My Pilgrimage