Elvis shakes his hips and the world yawns 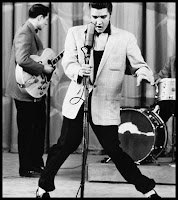 In yet another sad attempt to stir up controversy by conforming to the modern status quo of post-liberal hedonism, CBS has boldly gone where everyone has gone before to prove we still live in the 1950s, and that people will be shocked by such a title. Sure, there are protests from the good meaning, yet misguided folks who actually worry about our children. But knowing such priorities are a thing of the past in our enlightened culture, their opinions are increasingly irrelevant. The advent of mass media has, almost from the beginning, survived on shock value. Problem is, there is so little left that can shock. Even the story itself points out that decreasing amounts of parents actually care about language on TV today. It's just not a big thing. To truly shock, to stand against the status-quo, to speak truth to power, or challenge authority, try having a show based on, say, pro-life standards. Maybe traditional Christian morality. Or, dare we suggest, mature adults acting like mature adults and treating one another with respect and dignity. Now that would shock. It would also bring down the condemnation of our enlightened and tolerant post-liberal society. Just ask Tim Tebow about what it really takes to be controversial in today's culture.
Posted by David Griffey at 12:06 PM

Email ThisBlogThis!Share to TwitterShare to FacebookShare to Pinterest
Labels: Media, Popular Culture, The End of Liberalism