Star Wars is being released this weekend 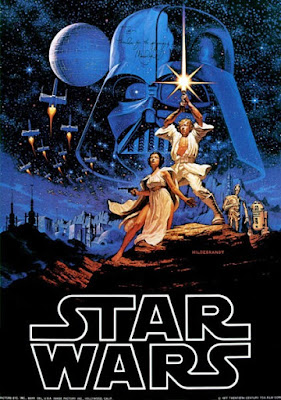 In case you missed the hype for the last year or so.  Now that the House of Mouse has the rights, expect marketing that will make the post-Star Wars merchandising of the first post-Star Wars era look tame by comparison.

Still, I'm optimistic.  Not that it will match the first.  You can't.  As I've said before, you can't match that any more than you can match the Beatles playing on Ed Sullivan the first time.  It's one of those cultural 'lightning in a bottle' moments.  For some reason, the moment in time is set to make that particular incident far bigger and more influential than it ever should have been.

In some ways, Star Wars was to film what The Beatles were to popular music.  And in both cases, that is for good and/or for ill.  Sure, there were other major movies and films, Citizen Kane and Gone With the Wind (still the box office champ) leap to mind.  Sure there were other major pop artists of immense success and influence: Frank Sinatra, Elvis, Michael Jackson.  But the Beatles, and Star Wars, stand out.  Something about both capture more than just the art they were part of, and went on to impact society at large.

The historical influence nod probably goes to The Beatles over Star Wars, since their influence would seep into the very cracks and crevices of Western Culture and help change the course of Western civilization.  Star Wars didn't quite pull that one off.  But for a few years at the end of the dreary 1970s, Star Wars was everywhere.  If you didn't know there was such a thing as movies, you knew who Darth Vader was.  You knew the theme song.  You knew the name. And it was a breath of fresh air, just like Rocky before it, for a generation in the doldrums of 'America's best is behind it.' 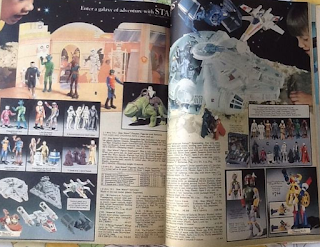 I first heard about Star Wars because my best friend had a godfather who worked in Los Angeles.  He even had a poster, showing scenes from the interior Millennium Falcon and the Death Star.  It looked so foreign to me.  I had never seen anything like it.  Then, in the summer of 77, an individual my parents knew by way of the CB radio craze told them to take me to see it.  My sister had just gotten married, and I was adjusting to being the only kid at home.  To take my mind off it, he said if I liked space movies and things like Star Trek, I might like this new space movie coming out called Star Wars.

So my Mom took me one afternoon to the movies that were located next to the Richland Mall in Ontario, Ohio.  Like Spielberg is reputed to have said, when the first 30 seconds past the opening scroll was finished, I knew something had just happened that would make movies look different from then on.  Even though I was only just out of 4th Grade, I knew it was different.

Like most kids that age, it captured my imagination.  My parents took me to see it a couple more times over the next year.  Once at a Drive In theater with my best friend Kelly.  It didn't make it to our town's little movie house until the following summer.  Demand was so great that it took that long. With a year notice, I worked my tail off to save enough money to see it every day it was there.  Back then, our town movie theater usually only played movies one week at a time.  It only had one screen.  But for Star Wars, it made an exception.  It played it for two weeks.  And I had enough money saved and earned to see it ten of those days. 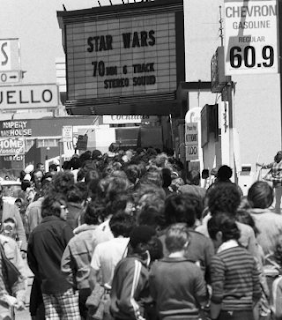 Despite it being a year later, lines still formed. On one day, I had to wait the length of the movie standing outside to see it again.  The movie house began having back to back showings because of the demand. Even then, I remember people sitting in the aisles and standing along the back in an effort to accommodate the crowds.  And we weren't alone.  I remember a movie theater in Cincinnati being in the news with a giant "Happy Birthday Star Wars: 1 Year Old!" on its marquee.  It had held it for the entire year.

The Star Wars mania continued until past the release of The Empire Strikes Back.  By then, movies had changed.  Star Wars was no longer unique.  Though arguably the best of the series in terms of quality, Empire failed to pass the receipts of the original.  And likely few movies could.  But it was what I have come to call the Great Fantasy Renaissance.  Sci-Fi was everywhere by then.  Star Wars was now just part of many.  And while still a strong fanbase, and still popular, it simply could not sustain the magic and the frenzy of that first year back in 77.  But then, neither did the Beatles.

So this time around?  I'm cautiously optimistic.  With Lucas out of the picture, it might make a fair enough showing.  Look at Jurassic World after all.  Many scoffed when it was first announced, but by many accounts, it was the best of the franchise since the first.  Force Awakens will not be the original.  It likely won't match the quality of The Empire Strikes Back.  But with any luck, it might just be the best since Return of the Jedi.  If so, it will make the wait worth it, and possibly redeem the ill will and bad memories brought about by the threefold cinematic train wrecks that were the prequels.
Posted by David Griffey at 2:59 PM