Why is Donald Trump popular?

Because despite the horrible things he says, they are horrible things based on truth and facts.  Compared to that, the soft and gentle and caring things coming from the White House and the liberal propaganda ministries are clearly based on lies and falsehoods.  To wit: 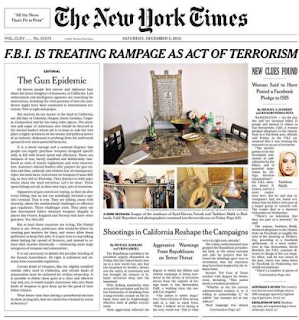 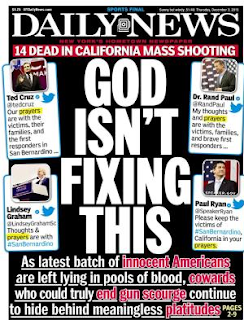 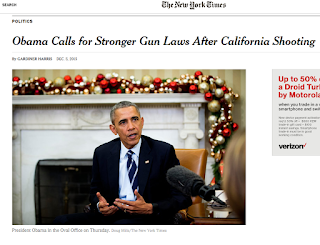 Meanwhile, the media ponders the shocking fact that the FBI might be considering this a terrorist act. After all, can we really jump to that conclusion?  Who's to say, right?  It's not like the Charleston Church shooting in which the shooter was racist, and nothing else.  America is racist.  Racism.  Period.

Interesting observation on my boys' part:  When the Charleston Shooting happened, not only did they only focus on American racism, but that was it.  They didn't link it to some other form of radicalism, like Islamic fundamentalism.  As opposed to now, in which the media is trying to remind us that even if radical terrorist who just happened to be Muslim did this, Christians can be just as bad (and only Christians are being mentioned, by the way).  Like agnostic Timothy McVeigh proves.

This is why I'd wager Trump, despite the stupid and wicked things he says, has a following.  In the end, at least he is telling the truth about a major issue in our world today, Those in the media and politics who would criticize him - and rightly so - are nonetheless in a world no more real than one populated by Jedi Knights and House Elves. And worse, a world of denial that doesn't sound like blind stupidity or naivety.  But one of falsehoods and lies that value flawed narratives and agendas over the well being and safety of those they would seek to oppress.

Update: Speaking of truths and falsehoods and ideologies and ignoring reality, it's now Day 3 at CAEI in which the San Bernardino shootings have not been mentioned.  They have not been referenced.  No prayers.  No reflections.  Nothing.  To his credit, Mark didn't jump on the media bandwagon and try, early on, to pin it on anti-abortionists, the NRA or conservative Christians.  And at least he's not being like the MSM making a spectacle of itself trying to avoid the obvious and spin reality into a sad joke.  But still, the silence is noticeable.
Posted by David Griffey at 11:24 AM

Email ThisBlogThis!Share to TwitterShare to FacebookShare to Pinterest
Labels: Anti-Americanism, The Leftist Juggernaut, The Power of Propaganda