The three stages of Star Wars

I've explained to my boys that there were really three stages of the Star Wars franchise.  And each of those stages held a different feel that's tough to explain today.  I offer up my observations on the eve of the release of what, hopefully, will be a fine addition to the originals.

This encompasses the first Star Wars (later dubbed 'A New Hope') through the last ten minutes or so of The Empire Strikes Back.  In this series, it is 'farm boy makes good, joins a ragtag bunch of heroes, and saves the galaxy.'  It held a certain magic and a certain optimism for a nation in dire need of both.  Like Frodo and Bilbo, Luke is simply at the right place and right time.  He has a little in him that sets him apart.  But it's basically that mix of talent and opportunity, courage and fortitude that saves the day.  Not just for Luke, but for the galaxy as well.  From 1977 until 1980, that was what Star Wars was all about.

According to all accounts, Lucas held the bombshell of Vader's paternal relationship with Luke until the last point of filming.  Empire was mostly finished when he called Jones and told him what the dialogue was going to be.  According to some tales, the original 'bombshell' was to be 'Luke, Obi-Wan killed your father.'  Whatever the truth, sources agree that it was only at the end of filming that the real cat was let out of the bag.  As a result, the movie was still filmed with the primaries believing it was part of Stage 1.  And it more or less feels it, if you think about it.  Watching it even with what we know, you can almost get a different feel throughout most of the movie than in those last minutes.  That's because now it is not 'farm boy makes good'.   It is destiny.  Luke is now seen as part of royalty all along.  He was always in the inner circle.  The power players.  The galactic movers and shakers.  Throughout The Return of the Jedi, the entire feel is different.  Things are now more a Game of Thrones than The Hobbit.  Sure, it's still rebels and the Empire, but it no longer has that feel, that idea that Luke was fighting the odds. In fact, if nothing else, you now have the idea that the odds were with him.  Luke had been 'Immaculately Conceived' to do what he did.   In doing it, he simply resisted the temptation to go down the wrong side of where he was destined to go all along. Ignore the last minutes, and the rest of the Empire - which was filmed without knowing the ending - is still Star Wars, part II. 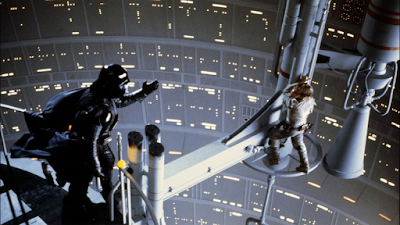 Those heaps of cinematic dung were what changed movies for the modern era.  If they didn't have the Star Wars brand, they would have been laughed off the screen.  But because they had the brand, they were box offices smashes each one. And that showed filmmakers that you no longer had to worry about quality if you wanted to rake in the big bucks.  By now the stories were so convoluted, the scripts and plots so mind numbingly bad, that it isn't worth writing about.  It just shows that when Lucas added that last ten minutes of Empire, he took the franchise in a direction he was not prepared to go.  And as power and influence grew with Lucas the Billionaire, he was ill prepared to keep the direction in check.  Who knows what the prequels would have been if the story had remained 'farm boy versus the galaxy'?  But as it was, Lucas opened up a can of worms that only got bigger and messier with each passing film. 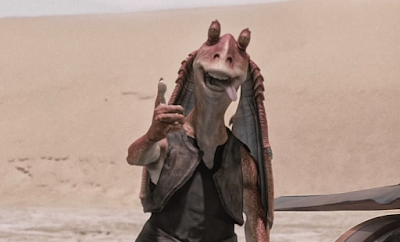 What the next one will look like remains to be seen.  But so far, I'm mighty optimistic, even if it will be the enchanted kingdom, and not the 20th Century Fox log, that ushers in the remaining installments. 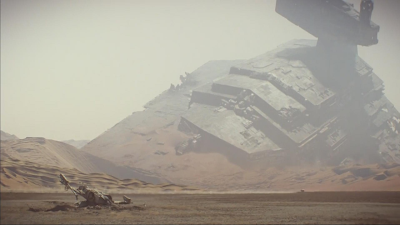 Posted by David Griffey at 8:49 AM