Or if you want a more educational movie experience I wholeheartedly suggest this: 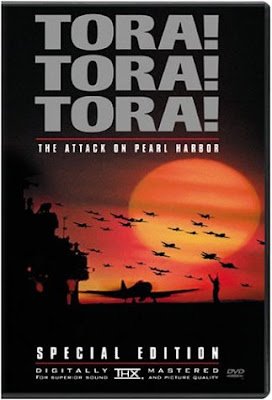 Tora, Tora, Tora.  It was a box office flop in 1970, since it's main purpose was to accurately retell the events of the attack on Pearl Harbor.  Roger Ebert hated it, which is always a feather in the cap of any film as far as I'm concerned.  Yes, the first half can drag as the film pieces together the events, but the star power and acting guns they brought into the project do help.
It is noteworthy for allowing both United States historians as well as Japanese historians to tell their sides of the story.  They then took those accounts and merged them.

Many of the action scenes, particularly around the attack, are based on anecdotes or attempts to recreate famous photos or film clips.  While mostly historical, there are a couple of departures from the historical context.  Yes, on rare occasion, some of the ships shown in long shots are actually later carrier and destroyer classes, and not the types that took part.  Likewise, you can always find a little discrepancy here or there.  On the whole, however, the ships and planes used were portrayed authentically.

Also, while the attack is mostly by the numbers, for dramatic purposes, a couple things are moved around.  The primary example being the death of the USS Arizona.  It was one of the first ships attacked, and within only minutes of the raid suffered the infamous fatal bomb blast that destroyed it and its crew.  In the film, in order to build up to a crescendo, it's doom is postponed until a proper climax in the action.

It's also noteworthy for showing how different America is from so many other countries and cultures.  The filmmakers have no problem showing America's bumbling, fumbling, and general incompetence.  The Japanese, on the other hand, are very conscientious of downplaying its strategy of a surprise attack.  The attempt to take Japan's official account, that it meant to declare war before the attack, leaves the view wondering: If they meant to give us warning, then why did the success of the attack depend on surprise?  That's because Japan, unlike America, but like most societies, does not fess up to mistakes and culpability that easily.

One more note. This is based on traditional, and generally accepted, historical renditions.  Not included are the ridiculous conspiracy theories that FDR planned it all, or knew about it and sat on the information in order to bring the US into the war.  Like most conspiracy theories, they have plenty of evidence to support it, as long as you are particularly hostile to the parties the theories are accusing.  There is always that key piece of information missing, that actual evidence that the conspiracy happened.  But the joy of conspiracy theories is they manage to dismiss any missing evidence as proof of the conspiracy.  But that's for another post.  For now, watch Tron if you must.  But I suggest adding a little history to the mix and plopping down with this, possibly one of the most historically accurate Hollywood movies ever made (which is not much of a complement, when you get right down to it).
Posted by David Griffey at 10:04 AM