The lie of multiculturalism for Columbus Day 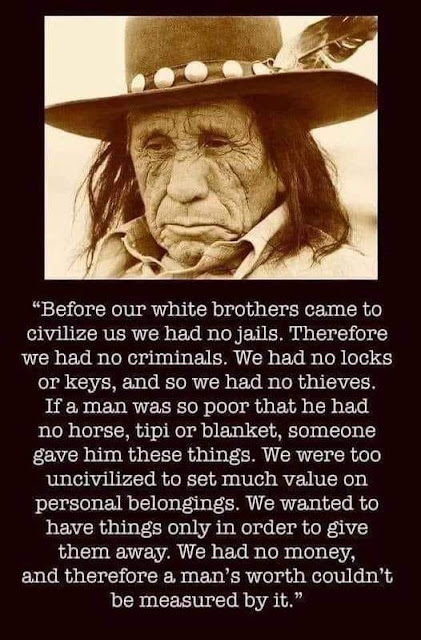 You see that?  I hope this is fake and no actual Indian ever said this.  But if it's genuine, then Indians were ... perfect.  Without sin.  Never did anything wrong.  Wonderful.  Fabulous.  Better than Jesus.   Just like those Bushmen in The Gods Must Be Crazy.  There simply was no sin, evil or wrongdoing before Europeans came to the lands. So says this meme that strongly suggests it's the opinion of an American Indian.

Which is stupid, wrong, a lie and false.  Indian culture was like any and all cultures.  It had plenty of wars, genocide, slavery, imperialism, conquest, thieving, wrong doing and politicking that would make Machiavelli blush.  Just like all tribes and cultures and kingdoms and nations since the beginning of time.

Multiculturalism was supposed to teach us Western children of Western Imperialism what the world was really like.  It functioned under two basic premises. One, that us Americans (and Westerners in general) never knew Western culture did anything wrong or bad.  Two, our views of the world were skewed because of our racist imperialism imposing our ideas of the world on the world instead of seeing the world from its own vantage point.

Therefore, there were two solutions.  First, emphasize, perhaps over emphasize (can you really overemphasize?), the sins of America and the West to wake people up to our own imperfections and egregious sins.  And second, allow other cultures to tell us just what their cultures and civilizations were really like.

On the surface, the first solution doesn't appear terrible.  Repentance and admitting to sin is a very Christian, and hence Western virtue, as long as it is done with the correct purpose in mind.  The second was a problem from the beginning.  It should be obvious that simply asking American Indians or Hindus or Africans or Japanese or Muslims or any people in the world about their own culture might actually meet with the same skewed or dishonest picture that Americans were supposed to have.  Especially since cultural repentance and admitting ancestral and cultural sin is not a universal trait.

But so it was, and so it is.  When my son had a cultural anthropology class, the line was already moved from my anthropology classes in college.  Back then, it was 'who are we to judge?'  In fairness, that was also how we were told to look at our own sins: the Inquisition, the Witch Hunts, Slavery.  We condemn the sins but not the sinners.

Today, we condemn the sins and sinners of the West, and go beyond simply not judging the sins of the rest of the world to almost embracing them.  In my day, we said human sacrifice or infanticide or child sacrifice were bad, but we don't judge the Aztecs or the Celts or the Native Americans who did such things.  In my son's class, they don't even know why we're fussing.  After all, in their course the question of human sacrifice itself is up for debate.  We know Global Warming is the threat of the ages and too many people are causing the world to die.  Therefore, it's perfectly acceptable to look at those Aztecs or Celts and think they may have been on to something when it comes to population control. So said his class's discussion.

Because we know from Multiculturalism, if it ain't Western, it's good.  We know this because people from those cultures are happy to say so.  Likewise, the idea that those things like child sacrifice or terminating the weak and sickly were bad comes from old white Western, Christian ideals.  And we know those were always and altogether bad.  Therefore, it's time to give sacrificing the baby to the fires a second look.  After all, if the worst civilization in history - Western that is - said it was bad, there might be something to it after all!

Happy Columbus Indigenous Peoples Day.  Celebrated not despite the savagery and barbarism of those non-Western cultures, but increasingly because of them.