The face of the modern abortion movement 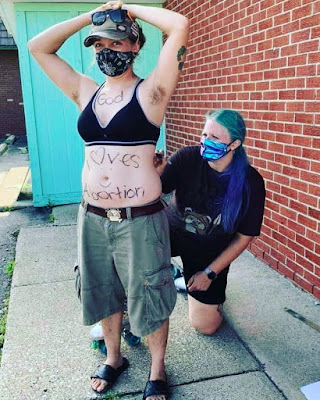 God bless and save her.  This is the side that New Prolife Catholics and Christians have all but allied with.  This is the side they say has no choice but to make the unfortunate, but completely understandable, decision to have an abortion,  Since, apparently, they accept the modern Sexual Revolution dogma that, unlike oxygen, food and water, people must have sex to live.  After all, suggesting women not indulge in the Sex culture seems never to be an option.  Plus, like anything today, depending on who you are, your sins are most definitely the fault of others who made you sin.  So the modern confessional will hear variations on 'bless me Father, for those reprehensible reprobates and evil economic policies made me sin.'

Additionally, most New Prolife Christians accept as near dogma the talking points of pro-abortion activists.  They regurgitate such slanders as pro-life advocates not caring about the poor, or doing nothing to help young mothers, or pro-life activists providing no support for expecting women.  All of which are false accusations.  I've seen nothing to suggest people opposed to abortion are any less inclined to do those things than those who support abortion.  The same goes for charity among conservatives versus liberals, but that's for another post.

In addition to these capitulations, another common narrative for the good New Prolife Christian (or Seamless Garment Catholic) is that women do not desire abortion.  They don't want it.  In fact, they'll go so far as to talk in absolutes and say no woman would ever want an abortion.  This is denial almost to the 'what camps in the German woods?' level.

The culture of death is a hungry god, and seeks more sacrifices on its altar, and we're serving them up in ways that would shame the Aztecs on a good day.  To that end, it has successfully met the growing skittishness toward abortion that younger Americans are developing with encouraging others to celebrate and praise the glories of aborted babies and all things abortion.  Be proud of your abortion!  Or so goes the new marketing campaign for Murder, Inc, as it was once referred to by Catholics across the Catholic blogosphere.

So while there is good news - though scant and heavily qualified - on the war against the modern infanticide that STEM built, there is heavy push back.  Those New Prolife Catholics and Christians aligned with this heresy, wrapped in a blasphemy, promising slaughter for debauchery, and delivering only tyranny and the outward persecution of Christ's Church, cannot continue to don blinders for the cause.  Continuing to say no woman wants abortions or celebrates an abortion culture isn't just denying camps in the German woods.  It's denying the camps five years after they were liberated.
Posted by David Griffey at 5:00 AM