Martin and Lewis on Pope Francis and division in the Church

Martin and Lewis.  Heh.  I was proud of myself for that one. 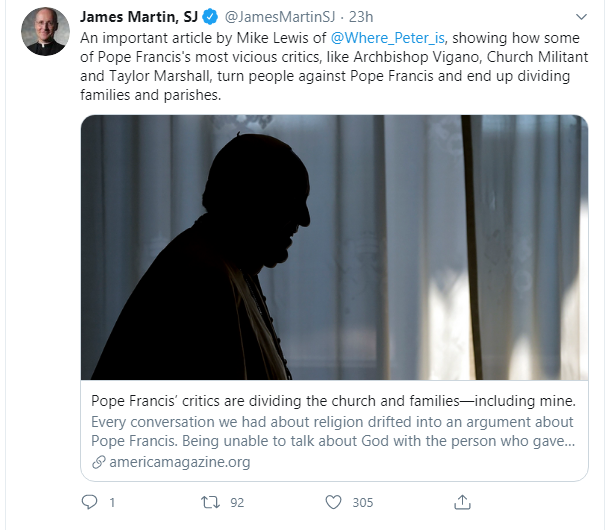 Anyhoo, Fr. James Martin tosses out a high five for a piece that is making the rounds in Catholicland.  Mike Lewis at the Communist sympathetic America magazine, has penned a rather direct piece about the divisions in our Church and who is responsible.  It shouldn't come as a shock that the problem is those critics of Pope Francis over there.

I won't spend an hour penning my appraisal of Pope Francis one way or another.  I will say one thing that has bothered me about his pontificate for some time.  That is, he has a knack for not using the First Person Plural when speaking about the problems in the Church.  Most often, he tells the World it has every right to despise the Catholic witness - and it's because of 'those Catholics over there'.

His whole 'we have met the enemy, and it's those Catholics over there' has brought about something I've never seen as plainly as I see it now.  That is, we have an entire culture of Catholics who routinely remind us that the problems with the Church are 'those Catholics over there'.  I get that this probably isn't new.  But it was looked down upon in the early days of my entrance into the Church.  If you had such a view, it was usually centered on a particular issue, and then there was usually some 'says I, the greatest of all sinners' qualifier, just to make sure.

We didn't want to be a Catholic pharisee after all, standing there, thanking God that He didn't make me like those Catholics over there.  You can certainly point out error.  It might even be Christian to confront error and those advocating error.  But never, ever just sit there and say you're not as much the problem as anything 'those' Catholics do.

And yet, since the ascension of Pope Francis, it has become almost normative to hear Catholic bemoan those Catholics over there who are clearly the problem.  And why not?  So does Pope Francis.  Again, he may say it sometimes, and perhaps it gets lost in translation.  But I'm at a loss to think of many times Pope Francis has said the problem with the Church is 'us', 'we', 'me first and foremost'.  He may have said it, and I don't want to be on record saying he never has.

So I've come to expect Catholics on the Internet to rush to their blogs whenever Pope Francis says something, and rejoice that he is finally and forcefully calling out 'those Catholics over there.'   I've seen it so many times now, I've lost count.  Pope Francis will let fly at some group of sinners, or more specifically, sinners in the Church, and good Faithful Catholics will rush to Twitter or St. Blogs to rejoice that he is finally calling out 'those Catholics over there.'

If there was no other reason to have a problem with Pope Francis, that is a pretty big reason.  First lesson in pastor school was always to make sure you use 'we and us' as much as realistically and truthfully possible.  The last thing you want, after all, is a congregation that is sure it's everyone else in the congregation who is the problem.  And always blasting 'them and they' is a great way to get minds thinking in that direction.  Which could be why it might be less Pope Francis's critics, as much as he and his supporters, who play no small part in the divisions they so often bemoan.

Email ThisBlogThis!Share to TwitterShare to FacebookShare to Pinterest
Labels: Catholic, The Catholic Blogosphere, The Pope