The New York Times does Catholicism and Racism

And shows just how perilous the situation is for Catholics.  Once again a clear and obvious evil has risen its head, and once again Catholics flock to embrace it.  Or at least they're told they should.
Almost overnight, Racism has become the only true sin.  It would be better to rape thirty babies and not be a white racist than to save thirty babies from a burning building and it be discovered that you once dropped the N-Word in college.  I kid you not.  An exaggeration perhaps, but only an exaggeration.  Of that we can all agree.
More than that, a newly endorsed racism has qualified this as a sin applicable only to one ethnic group: Caucasians.  In a manner of saying we don't hate Jews, it's Sons of Abraham we hate, most qualify this new racism by saying it isn't Caucasians we're talking about, but Whites.  And in the usage of that term, the word White is now used entirely in a negative, pejorative manner.
It is only Whites who can be racist, or so the modern social order insists.  A black man who pledged to murder white Americans and proceeded to kill five police officers in cold blood is not to be condoned.  But he wasn't called racist, either.  In fact, while nobody explicitly excused his cold blooded murders, they nonetheless qualified them as the result of one who has lived in this racist state filled with genetic racists who can be identified by their skin color.
Already, Caucasian Americans are being sent to ethnic reeducation seminars, as this example from a Seattle diversity training document shows: 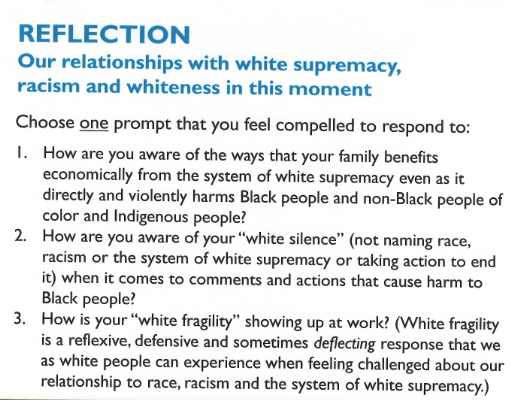 I ask you, does that seem to be the way Nazis talked about Jews in the 1930s?  If you say you bet it does, then you've studied your history.  The study of history, by the way, is something at least some are now beginning to question.  In fact, in a brilliant maneuver, there is a growing consensus that almost everything we ever imagined was right or true or good is, in fact, wrong.  Almost anything we can appeal to in order to suggest something isn't right about this development can be turned on its head and accused of merely being the result of "Whiteness" (think, the "Jewish problem").
This is far and beyond a new Jim Crow mentality or Dred Scott thinking.  This is the threshold of Nuremberg Laws mentality, almost overnight embraced and endorsed by a growing swath of our society.  It took centuries to reach the doorposts of Auschwitz.  The idea of the Whiteness Problem has emerged in merely a couple generations.
The real spin on all of this?  It's largely being driven by good, white liberal Americans.  Though it should be noticed ethnic minorities in America, as well as nations around the world, seem to be warming up to this idea that the whole of European and Anglo-American Caucasian civilization is a blight upon the world needing eradicated, or at least beat down to where it belongs.
How is it white American liberals can do this and yet not be culpable in their blanket condemnations?  How can they almost embrace their inherent, genetic racism and yet not suffer the logical consequences in terms of shame and guilt?  I don't know.  It's almost as if the political Left has become their god, and the gospel of liberalism that which alone can save.  Having been cleansed by the one, true saving gospel of liberalism, they can now proclaim the inherent evil of their own demographic knowing that whatever ramifications come of their guilt, those ramifications will not impact them. I"m just not sure.  One thing is for sure, it's certainly not belief and trust in Jesus Christ that cleanses you.  I know that from the easy assumption that Caucasian Christians who fail to see the issue in the leftist way are racist, their relationship to Christ being entirely irrelevant.
Nonetheless, whatever the reasons or causes, it's racism, evil, unchristian, ungodly, and altogether so flagrantly the stuff of Satan that you wouldn't think we'd fall for it again a mere century after the last time.  And yet, look how many are stumbling over themselves to say this is the only way to address the broad and universal problems of humanity that have at times manifested themselves in the form of racism, prejudice, discrimination and even slavery.   Look how many Catholic leaders are falling over themselves to put a stamp of approval on this.  Look how many Chieftains in general.
It's as if overnight the new Chancellor was selected and everyone realized resistance was futile.  Sure, racism exists in America, and has been a problem, as it does exist around the world and always has.  You need only see how some young black Americans speak about white Americans to realize it's an attitude that goes beyond ethnic boundaries.  Heck, listen to how some blacks speak about Muslims, or Hispanics, or how some Hispanics speak of black Americans or Asians.  There are always problems in the human race to fix, and racism and discrimination are hardly unique among them.
We've simply allowed the rules of human history to be rewritten, however, and the very laws of God to be jettisoned and thrown out the window in order to take this worst of all responses to the sin of racism and sanctify it by our lack of vision.  Will the Catholic leadership pull out of this one and bail out in time?  Or will future generations look back when even Catholic clergy admitted that Jesus was far happier to see people with some skin colors as opposed to other skin colors?  Who knows.  We'll have to see I guess.
Posted by David Griffey at 5:00 AM

Email ThisBlogThis!Share to TwitterShare to FacebookShare to Pinterest
Labels: Catholic Church and the Left, Decline of the Christian West, Racism, the Joy of Racism on the Left