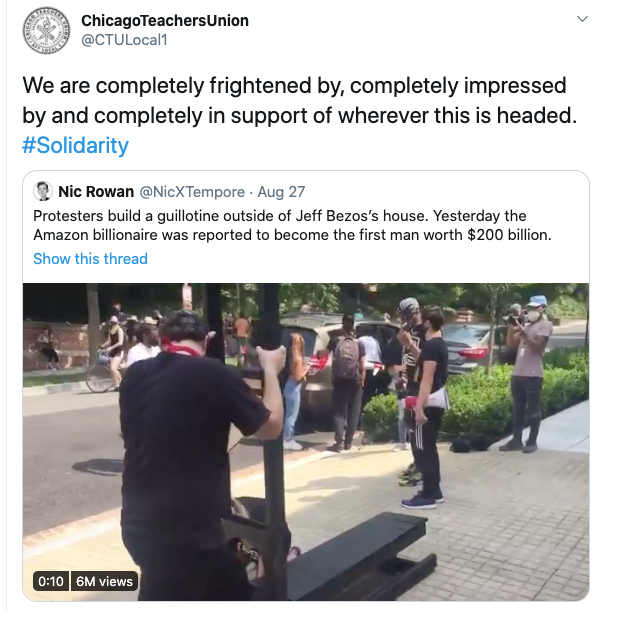 Yep.  That's a growing thing with America's communist revolutionaries:  Guillotines.  Which is fair.  They've already convinced leftist Americans - including Christians and Catholics - that the Robespierre approach to justice is the only approach to justice.  That is, enemies of the Left of any race, gender, creed or religion - must be eliminated.  At this point we don't even care about facts, evidence or truth.

So there is a purity in honesty with it all.  Some are just stunned that a Teachers Union would give such symbolism glowing praise.  And not only that, but support 'wherever this is headed.'  Woof.  Sane people and Christians who believe in the Church's historical teachings on sin in a fallen world know damn well where it is headed.  Increasingly the American communists are flagrant about where they want it to go.  And increasingly they are getting more and more support from our elites, our power players, even our religious leaders.  As can be expected.  See the last century for more examples of such developments.

One way Conservatives screwed the pooch, as the old saying goes, was alienating those who livings were tied to things like the government or taxation.  And that includes schools and education.  Somehow Conservatives pledging to hack and slash taxes (and hence, the benefits and pay of those who relied on such income), along with their pledge to downsize (that is, throw thousands of government workers out on the street) led to an interesting development.

That development was people who worked in such professions increasingly favoring and supporting the opponents of those who wanted to slash their incomes or throw them out on the street.  And if that opposition wanted things like godlessness, communism, tyranny, oppression, genocide, racism, or whatever, guess what?  Those in such professions might not have enjoyed doing it, but they nonetheless chose to join that rather large historical group known as the 'enablers' by preaching and teaching the doctrines of that opposition.  Given how many teachers we hear discuss their latest cruise in the Caribbean or annual trip to Disney World, I think they chose wisely.

That is one reason this happened.  There are many others, as is always the case with historical developments.  But now we're beginning to see the end result of this revolution's designs.  We see what it wants, how it wants to do things, and its end goals.  And we're watching as we are impotent and unable to stop it.

Email ThisBlogThis!Share to TwitterShare to FacebookShare to Pinterest
Labels: End of Liberty, Left and a New Communism, The Decline and Fall of the American Dream