The Evil the Left does

Now, I'm not stupid.  I know evil is a universal. I subscribe to the historial Christian doctrine of original sin.  Or even as the Orthodox put it, the proclivity to sin.  Either/or, it means humans are not born with a moral blank slate, only to be forced into sin by corporate corruption and societal oppression.  Each individual will gladly sin at points, purely because that's what we do in a fallen world.  Anyone who has raised babies will attest to this fact.  It isn't society that teaches the youngest of children to do wrong. There is something in them that compels them to do it on their own.

Therefore, no ideology, group, demographic, culture, nation, civilization, or any other identity of humans is devoid of wrongdoing.  All have sinned, as the Bible acutely observes.  Far be it from me to disagree, or think that such a level headed observation applies to only one side of the aisle.

But here is the difference.  It's not when a society or nation or kingdom has evil in its ranks that is the problem.  It's when the evil begins to be endorsed, excused, and even supported by the main institutions of power and influence within that particular society.  That's when things get ugly.

Right now, the Left controls most of those institutions.  It has the 'news' media, most of our arts and popular culture venues, our education systems, a sizeable portion of our government, a growing segment of corporate interests (both large and small), and no small number of religious traditions and their leaders.  With this monopoly of thought, it becomes increasingly easy to dismiss, ignore, or even excuse and defend the most heinous, evil, and wretched attitudes and behaviors.

We've seen this with the politicization of Covid-19.  Is the Left the only side that has spun this for gain?  No.  But its spins have been all but embraced by these institutions that should exist to point out such abuses.  Is the Left  the only one to produce terrorist groups and violent organizations bent on destruction, hate and death?  Hardly.  But those that do exist and that preach the Leftist gospel are ignored, or excused, or even endorsed by all of these cultural power cells.

And that's the difference.  So the fact that prominent individuals - not just hacks somewhere in some basement or log cabin in the Montana wilderness - have despicably seized upon the death of President Trump's brother to score points and wish President Trump himself death is vomit inducing.  It's the stuff all humans should be ashamed of.  And yet, I'd wager little to no attention will be paid by our mass media culture.  So anyone else on the Left will easily be able to ignore the evil, or even laugh along.

That's the problem.  As the Left pushes genocide attitudes, eugenics based ideals, hatred, racism, bigotry, violence, oppression, destruction and all manner of evils, those same institutions that should stand firm against such a movement instead ignores it at best, or supports it at worst.  And those on the Left - from dock worker to priest to mob boss - are able do so as well.  That's how the terror states of yesterday happened.  That's how America will become everything the Left ostensibly fears America becoming.

So the Christian approach to this is to call out such evil, and send prayers for President Trump, his brother, and their loved ones.  May the peace of God, which suprasses all human understanding, cover their hearts and minds in Christ Jesus.  Amen. 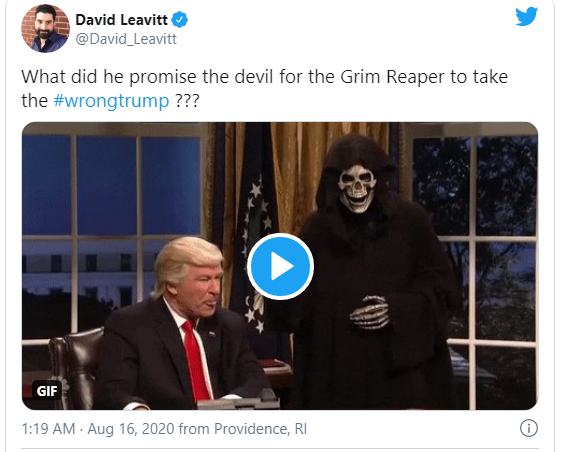 Posted by David Griffey at 3:14 PM

Email ThisBlogThis!Share to TwitterShare to FacebookShare to Pinterest
Labels: Evil, Memorial, Prayers, The evil the Left does