How the propaganda ministry does it

So last week it was all Green Checkmarks.  That is, each news story I saw analyzing claims made by the Democrats reported that they were true, or mostly true, or in a couple cases not altogether true - but they still all got a Green Checkmark  meaning true!  100% green last week.

This week, of course, the dreaded Red X of falsehood has begun flying like mosquitoes.  I've already seen two after the first day.  And those claims not marked as false but in someway not completely and technically true are being pounced on.

That's when I saw the outlets pounce.  Of course Puerto Rico is a US territory, and its citizens are officially US Citizens as well.  I know, it's complicated.  Don't ask me to unpack the history of that hot mess, why it's not a state, what the differences are and how it all works out.

But the media outlets were quick to mock her for apparently not knowing that she always was, technically at least, a US Citizen.  Even the good Deacon Steven Greydanus got in on the act: 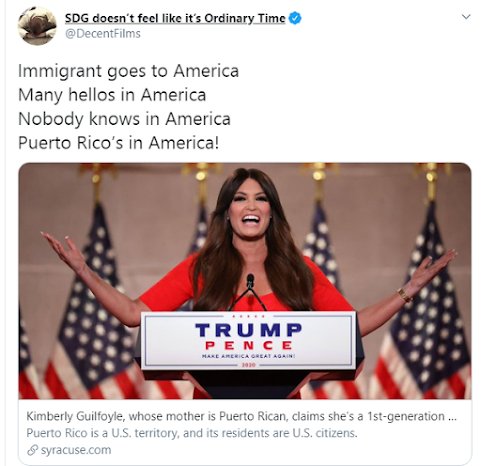 Yeah, see a conservative do that about something a liberal Puerto Rican immigrant said at the DNC and imagine what good progressive Catholics would say.

But here's my thinking.  Could it be that this says something about how those in Puerto Rico see themselves?  Could it be insight into their way of thinking?  Might it mean something that they see being here as what should matter, and this could shed light into how at least some understand this complicated matter?  I mean, doesn't charity demand we consider such things rather than just tweet 'what dumb-dumbs'?

Or not.  Goodness knows we can't focus on her speech about how great America is and how wonderful a land of opportunity we are blessed with.  Heaven forfend.

Again, since apparently not a single Democrat said anything wrong last week, it's hard to tell how the press would react.  But I get the feeling that if all things were equal, and the only difference being Ms. Guilfoyle works for Biden, you would hear none of this.  And if someone at FOX or similar outlet did make a stink, the rebuttals and charges of racism would be swift and brutal.

Whatever it would be or not, however, note how this worked.  Nobody is talking about her speech at all.  Those who are talking about it are getting caught up in these trivialities.  But in all things, the greatness of America as land of opportunity, which you might have come away from her speech with, is entirely forgotten.  And that Charlie Brown, is one way the propaganda ministry - with help from choice Catholics and other sympathetics - does it.

Quick note: As I was getting this ready, I was notified of another Greydanus original that follows the same 'focus on the molehill of the opposition so we don't have to focus on the mountain range of mass slaughter on the Left' tactic:

Yep. Why join Ms. Johnson in her condemnation of one of history's most brutally efficient human slaughter machines when we can ping her on a triviality?  Oh sure, Planned Parenthood was founded on Margaret Sanger's principles of exterminating minorities, poor and other sub-human reprobates which it continued to celebrate until a couple years ago, and yes it continues to help with the annual slaughter-fest of a million screaming innocents - but Johnson said a goofy, Johnson said a goofy!

Sigh.  Especially when you see the same good deacon prepared to eviscerate someone like Abraham Lincoln for failing to be as morally perfect as the modern Left demands when it comes to judging and hating on the right and wrong skin colors for the right and wrong reasons: 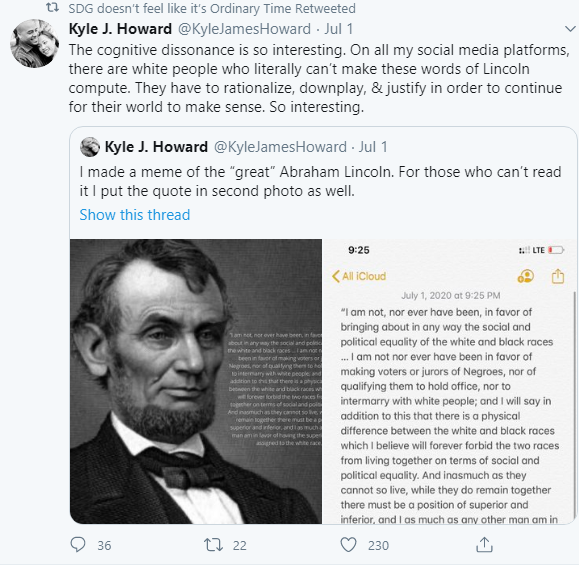 Yep.  Note the word Great in scare quotes.  The New Prolife Catholic movement in action.  Not a shred of understanding or sympathy for those in the past who were of their time, nor letting pass a slip of the tongue from Pro-Life advocates today, all while giving endless benefits of endless doubts to the modern equivalent of the human slave trade.  This is just what the press propaganda ministry, and the Left, wants from its confessing Christian supporters.