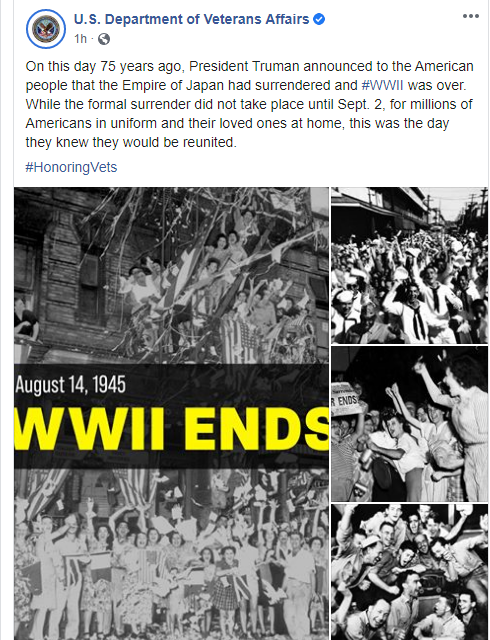 Yep, it's almost forgotten.  Liberals, being a Western focused brood, tend to dismiss the War in the Pacific part of WWII.  I actually have history texts on World War II that confine the entire Pacific War into a single chapter.   To us, WWII is all about the Nazi menace, because that's so easily blamed on the West, and America.  Even Pope Francis has embraced this idea that the Western Allies could have bombed a few rail lines and ended the Holocaust, but chose not to because of our racist ways.  Therefore since we can call Nazis evil, and use Nazi evil to condemn all of the West, we like the European conflict.  Heck, we even give a nod to Normandy once a year or so.

But the Pacific War?  That gets sticky.  We all know that the US, being racist, all but forced Japan (who we grossly underestimated because racism) into attacking us, which was part of FDR's plans.  We then decided to invent the Atomic Bombs in order to kill as many Japanese babies and Japanese Catholics as we could.  Beyond that there were some aircraft carriers or something, and that's about it.  By 1945, Japan was clearly a broken and penitent nation wanting only peace, love and John Lennon songs.   But us racist Americans would have none of it.  We already had our eyes on world domination and oppression by way of our mighty Military Industrial Complex.   Using Japanese babies as guinea pigs for a show of power is just what our old American racists craved.

Or so the gist of my boys' history books seem to suggest.  All of this ignores those inconvenient non-whites who are always pests when their lived experiences don't jive with Leftist propaganda.  The fact is, one of the strange benefits we've received from China - and other Asian and Pacific Rim nations - emerging and trying to assert themselves is hearing their perspectives.

Remember, after WWII, Japan emerged as our prime, and just about only, ally in the Orient.  Never ones to spend too much time in humility and repentance, Japan was more than happy to ride the crestwave of American guilt and shame that was emerging during the Civil Rights era, and stoked by all those Soviet bots who were seeing post-war era America as their chance.

Since Truman had plenty of enemies in our own ranks, not the least of which were Eisenhower (political) and MacArthur (personal), we seemed to have ample evidence that Japan was truly a place of peace loving humble penitents when the US decided to nuke them a couple cities.  Popular portrayals of hayseed Americans loving the fact that Truman showed them Japs a thing or two only solidified the idea that this horrible thing happened in a vacuum for no discernable reason.

It didn't help that there really is no way to square Christian ethics with dropping a meg-bomb on a city filled with the elderly, women, children and infants.  The verdict was in, and America emerged as the bad guy, second only to those Nazis whose defeat we prefer to focus upon.

But yet, you have those emerging voices as other nations, such as Korea, Vietnam, Burma (now Myanmar), and China began to tell a different tale.  The really big break with the Japanese narrative was the emergence of the Korean Women.  At a time when feminism was riding high, their stories of systematic rape camps built by the Japanese for the sole purpose of using them as sex slaves for their soldiers sent shockwaves.  That hurt.

That didn't only hurt, but it inspired younger Japanese to start rethinking what they had been told about the war.  I know from a girl I dated in college, who was from Japan, that Japan's take on historical events and our take were quite different.  Much of what she heard here in the States she had never heard before in Japan.  Plus, beyond such young Japanese seeking truth, the other Asian countries began to tell their tales.

It turns out, WWII begins in 1931, not 1939 like the press always says.  WWII was already going strong, and atrocities piling up, before Hitler came to power or Mussolini was humiliated in Ethiopia.  And the atrocities continued.  Well beyond the infamous Rape of Nanking, Japan's atrocities rival that of Nazi Germany, if even a restrained acceptance of the various Asian nations' perspectives is taken.

We don't know how many millions were killed.  Japan is not nearly as repentant as Germany.  Plus, many of the places in which the atrocities happened were not occupied as Germany and its conquered territories were by the Allies.  In addition, it's tough to figure just who killed who.  Like Germany's clash with the Soviets, sometimes we have a hard time figuring out if China caused the death of so many of the millions, or if they were all Japan.

In any event, we now have a much different picture of Japan in August, 1945 than that which was promoted by Japan or critics of Truman's decision to drop the nuclear bombs.  We know that it was a terror state on par with Nazi Germany, and thousands suffering and dying daily under Japan continued to do so up until its surrender.  We also know, thanks to a robust inquiry from within its own borders, that the Japanese high command was in no way prepared to go down quietly.  An invasion and conquest and nothing less is what they were planning.  And given the horror of Okinawa, that invasion would have been one of the worst in all of human history.

Meanwhile, just waiting Japan out or starving it out would have consigned endless tens of thousands of Japan's victims to torture and death.  Not to mention that the American presence in the area that would have been needed to starve Japan out would have stood exposed to Japan's suicide bomber mentality.

No, from a Christian point of view, it's tough to reconcile the decision to drop atomic bombs on cities filled with children and the innocent.  Even dropped on purely military targets would be hell and gone from chivalry.  But it was hardly an evil in a vacuum.  If anything, America stands guilty, as the Christian West usually does, of sinking to the level of the world around it.  Already the death toll of World War II averaged in the hundreds upon hundreds of thousands a month.  As many died on average in a month during that conflict as were killed by both atomic bombs.  And one of the biggest causes of that death toll was not the relatively small percentage drawn from the Strategic Bombing operations, but from the Holocausts, the Eastern Front, and Japans's own reign of slaughter and terror.

It shows what happens when good people get pulled into bad things.  At some point, in this present darkness, the only way to realistically stop the bad is by joining the bad.  Perhaps the lesson isn't to condemn the US but to learn the best way to beat evil isn't to join it.  Yet despite America's slip into that, it nonetheless managed to stand higher than many countries in an age where killing by the tens of millions had become the norm.

If nothing else, for a moment at least, that was certainly worth celebrating.

Email ThisBlogThis!Share to TwitterShare to FacebookShare to Pinterest
Labels: American, History, What We Learn from History