Another reason to hate cheerleaders

For a position every girl was always measured against, there have been few things you could do that brought more ridicule and lampooning than being a cheerleader.  How many movies and television shows have mocked and laughed at cheerleaders for being vain, shallow, stupid and pompous over the years?
Well, happy is it to live in American in the 21st Century!  We have a new reason to hate on cheerleaders!  At least cheerleaders in the South.  At least white cheerleaders in the South.  At least white Cheerleaders in the South who took a picture saying they loved Redneck boys with a confederate flag.  I mean, outrage has already ensued over the school not promptly throwing them off the team like they deserve.
That's called a tolerant, diverse and enlightened society by the way.
On that train of thought, has anyone noticed that the national press has not even bothered to analyze the Black Lives Movement and its claims?   Has anyone else noticed that the press in almost 100% agreement, has promoted, lauded, praised and endorsed the whole BLM and its claims?  I mean, they aren't even trying to be unbiased in this.  They are almost the marketing agency for the Left at this point.  They aren't even pretending to look into its claims.  As far as I know, there hasn't been a single news outlet to even bother with an alternative viewpoint.
You'd have been better off celebrating communism in the 1950s than saying Black Lives Matter isn't truer than the Gospel.  And with that angular mandate, almost everyone - entertainment, sports, businesses, education, religion, even people's homes - are increasingly called upon to approach the altar and lay down the appropriate sacrifice.
BTW the offending picture and the BLM agent seeking their eradication from the sporting program: 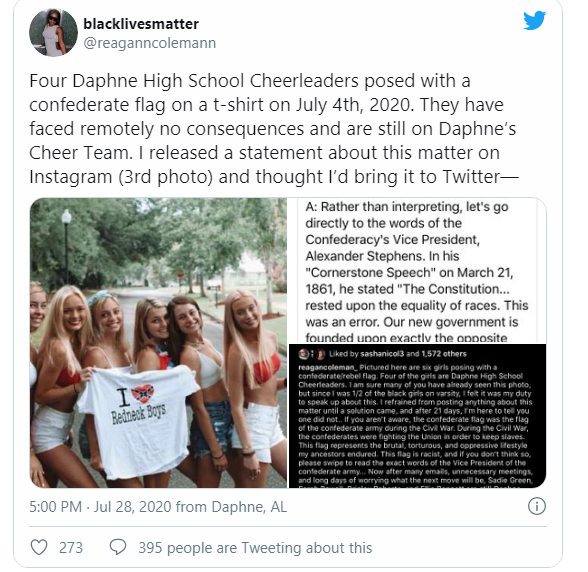 Not to nitpick, but I count at least six cheerleaders.  Is it only four because it is four who touched the unclean thing, or is there another reason only four are being singled out?  Curiosity on my part.
Posted by David Griffey at 6:00 AM