So I'm still thinking about this comment from Catholic apologist Mark Shea that was posted by Donald McClarey here: 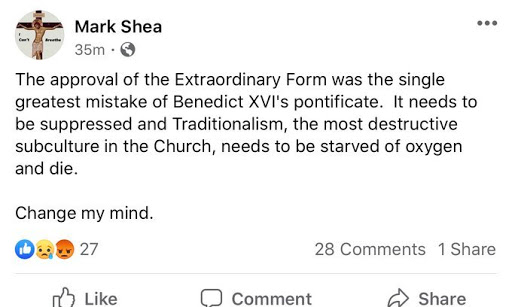 I can't think of a more Protestant approach to Catholicism than wishing that part of Catholicism and those Catholics I don't like to be eradicated from Catholic life and done away with.  The essence of Protestantism is, after all, saying this or that part of the Historical Faith sucks and is wrong and evil and brought by all these reprehensible reprobates in the Babylonian Captivity, and it's high damn time we send it and them to the cornfield.  It's not Sola Scriptura that is the capstone of Protestantism, no matter what the theologians say.

And there is no better demonstration of this mindset that the Catholic apologist's comment above.

Email ThisBlogThis!Share to TwitterShare to FacebookShare to Pinterest
Labels: Catholic, Catholic blogging, Catholic Church and the Left, The Catholic Blogosphere