Ah, consistent pro-life ethic.  That's a phrase tossed about, usually by Catholics who cleave unto the Left of the political center.  What it typically means is that you can't be pro-life and also challenge the horses and chariots of the Political Left at the same time.  Like many things in the progressive camp, it's a slick way of herding the conversation along a one way road.  You either agree, or you're not pro-life.

Now, the hirlairty is that those doing so are as often as not fully supportive of a political movement that defines itself by promoting and supporting the Sexual Revolution, the abortion culture, and increasingly such goodies as embryonic stem cell research (remember that?), legal assisted suicide, post-birth abortions (AKA infanticide) and even dipping their toes in the pool of euthanasia.  Add to that its embrace of modern racism and racial based evaluation of human worth, and you wouldn't think there is much pro-life there.

But the NPLCs are able to pull upon the secular, progressive belief that there are no sinners but that corrupt and oppressive social structures make it so.  Therefore, if anyone does have abortions, indulge in sexual deviancy, rape, pillage, murder - it must be the fault of 'The Man' (things valued by Conservatives).  And it's only the horses and chariots of the Political Left that can possibly save us from The Man.

That's a brief look at how they do it.  What it boils down to is a radically inconsistent pro-life ethic disguised as anything but.  The real strange irony in all of this is that one of the frequent targets of the NPLCs is a young lass named Lila Rose.  Ms. Rose exploded on the national stage for going undercover and exposing the murderous profiteering of Planned Parenthood.  Almost overnight, good Faithful Catholics decided that the best thing to do was fret over the dishonest means necessary for an undercover operation that discovered the evils beneath Planned Parenthood's murderous industry, than focus on the evils beneath Planned Parenthood's murderous industry.

Since then, she has largely been ignored, or occasionally blasted, for daring to suggest things like undercover work is acceptable, or that you can't be prolife and support a party whose platform is dedicated to falling on the sword and throwing the least of these under the bus so that abortion can be santificed and expanded in all possible ways.  Go figure.

Anyhoo, I find Ms. Rose, far more than most Catholics who try to bake that Kosher Ham of Leftist Catholicism, to be authentically and consistently pro-life.  That doesn't mean I agree with her all the time, or even her approach to things.  One doesn't need to agree with me to pass the 'righteousness' test.  I look at why she says and does what she says and does, and hold it up to other things she's stood for and against.  And in that, she's far more authentic and reliable than many of her NPLC critics.

So here are a few tweets of hers I saw populate on another site that illustrate the point. 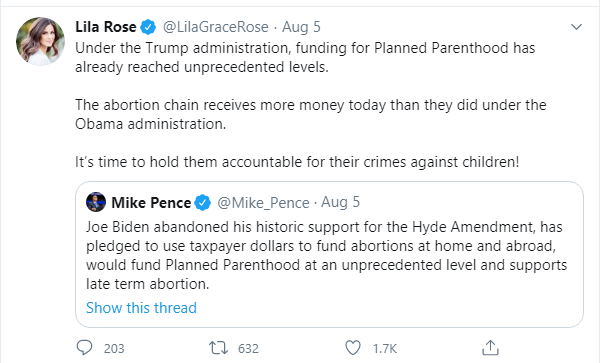 Yep.  Trump is not my cup of tea.  I get that he is the one bulwark against the pseudo-communist juggernaut, but that still doesn't mean he's not a fistfull of problems.  Continuing to blame everyone else for failing to cut such funding is no different than Obama blaming everyone else for his anemic recovery.  I get why it's happened.  I'm certainly not inconsistent or stupid enough to say since Trump failed to eradicate funding of Planned Parenthood, I'll therefore support the party prepared to throw the least of these out the window and hold America hostage to ensure funding of Planned Parenthood.  That's like saying FDR, having failed to eliminate the Holocaust, I'll now support the Nazis who have perpetrated the Holocaust.  So she's right here.

But notice she goes after Trump where it is due, but then observe:

Again, she doesn't fall for the 'fed up with FDR, I'm now a Nuremberg Catholic all the way' approach.  She sees the evil and the culture of death on the left side of the aisle just the same.  For many Catholics, it's hard not to see their trashing of Trump as merely the excuse to support the party of death they so long deplored.

And then, she also does this: 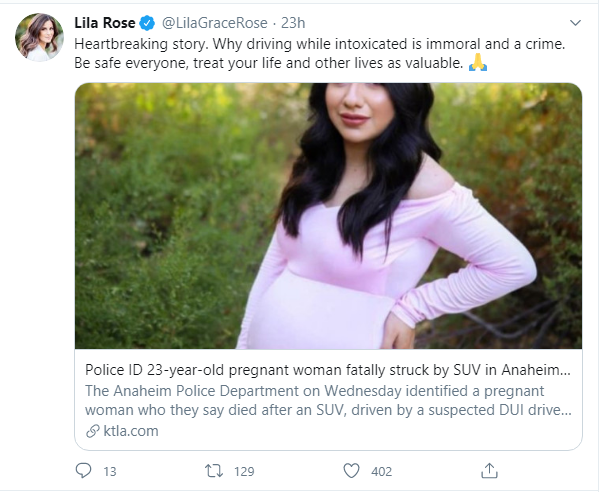 One of the worst things Pope Francis ever said was his 'who am I to judge' dodge where gay sex is concerned.  The Sexual Revolution will certainly go down in history as one of the greatest human tragedies ever visited upon mankind in all of history.  Abortion aside, the body count is beyond comprehension.  Add to that the genocide level slaughter of the abortion culture that is needed to sustain the revolution, and it's unlike anything we've ever seen.  And it isn't just sex. It's the drugs, the party, the debauchery, the selfish apathy that became sanctified during this time.

I must say the Orthodox are better at calling this one out than Catholics, or even Christians in the West in general.  Afraid they'll say meanie things to us (or perhaps enjoying the fringe benefits of the revolution), we're rather tepid about calling it out.  Given the suffering, carnage, misery and loss attributed to this Party till you Die revolution, our lack of stalwart opposition is shameful, and hardly consistently pro-life.  Even Pope Francis deserves a smack on the hands for giving this a pass when he's so prepared to brutally judge other sins that are usually associated with thinking above the waistline.

But Ms. Rose gets it right.  Again, I'm not saying I always agree with her.  And sure, we can discuss her methods.  But compared to the dumpster fire inconsistencies of so many of her Catholic critics, I'd say she is a far cry more consistently pro-life than many of them are close to being.