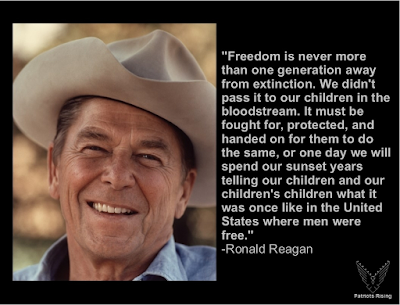 Is best summed up in this piece, discussing the need for Freedom of Speech.  The fact that the article must be written reveals the great threat of our time.  Terrorism, domestic and foreign, is nothing compared to the growing argument that Free Speech is Hate Speech, which therefore must be condemned and banned.

That the Left has now opened the gates to defending those who use government intimidation, physical violence, assaults, censorship and other authoritarian tactics shows that the usual institutions who used to be guardians of the Word are fast emerging as its staunchest enemies.  Where is the world of art and entertainment, where is the press, other than standing firmly behind this movement to redefine who does and doesn't have the right to express themselves?

Today is a good day to reflect on this because, as Donald McClarey points out, it's also Ronald Reagan's birthday (and Donald McClarey's, too!).  Reagan was one of the most optimistic people to sit in the White House.  Sometimes that didn't serve him well.  But despite his optimism, he was no fool.  He understood that even America could sell its birthright of freedom for a bowl of stew.  He knew that we were not just one day away from poverty, but one generation away from totalitarianism.

This revolution against liberty and freedom has been generations in the making.  Jordan Peterson has emerged at the right time to call this movement out for what it is.  While he acknowledges the threats that come from the radical response to this Leftist movement, he knows that the core of the problem is the Left's growing insistence that there is no right to not be a Leftist.  He knows that the Left would redefine freedom and liberty to mean the freedom to conform to the Left under threat of physical violence and government retribution.  In the end, it was Jordan's exposure of the hypocrisy behind one of the Left's biggest tools for accomplishing this - banning hate to avoid offending - that has made Jordan a star.

Whether or not Jordan lasts or is merely a blip on the screen doesn't take away his importance.  He has sounded the warning bell by word and deed.  A storm is rising, and it seeks to undo everything that the long, agonizing march toward freedom and liberty strove for over the centuries.  And once it's gone, as Reagan understood, it won't be coming back any time soon.

Posted by David Griffey at 1:00 PM

Email ThisBlogThis!Share to TwitterShare to FacebookShare to Pinterest
Labels: Defending Liberty, End of Liberty, Triumph of the Left