The growing push within the Left to eliminate the Constitution 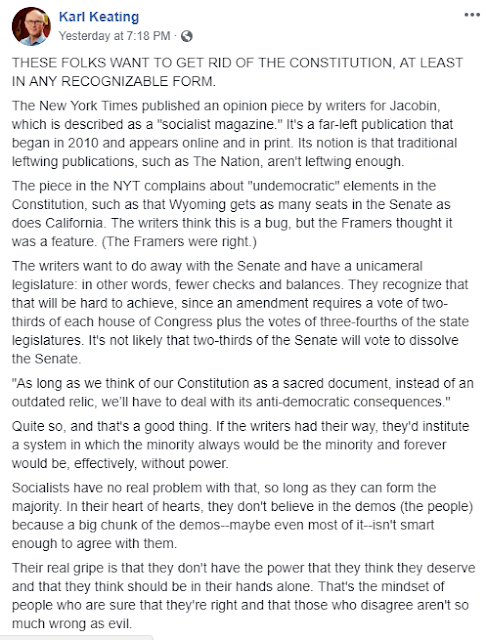 Yep.  This isn't new.  Ages ago while I was still a pastor, I was watching CSPAN one evening, and it showed a contributor from Salon.com speaking at a Unitarian Universalist church.   I can't remember the topic.  What I remember is during the Q&A session, someone asked the speaker about eliminating the US Senate.  After all, it was unacceptable that some state like Montana or Wyoming with virtually nobody of note would have equal say alongside the obviously superior coastal liberal states with all the big populations.  The speaker merely chuckled and said that issue was for down the road.

Well, we're getting close to down the road.  The Trump election, and the recent push-back against a post-national, global Marxist, atheistic world order has kicked the Marxist Left into hyper-panic mode.  As such, they're pulling out all the stops.  Because the forces that might resist this are busy being divided and trying to make sure that they come out looking better than those other conservatives, this panic is beginning to yield fruit.

I mean, we've already abandoned the notion that we need due process, presumption of innocence or burden of proof before someone's life is destroyed.  We might even destroy their life because their wife spoke to someone who was accusing someone of doing something wrong.  Serious KGB world living.  Who says we're still free?  And we seem fine with that.

We're certainly OK with saying you can hate on people because of their skin color, national origin or religion.  Whether or not laws even apply to you might well be based on those factors.  The Iconoclasm against the Confederacy is already spreading to the rest of our nation, as increasingly we learn that there is not a single thing, not one, from the Christian West or historical America that isn't irredeemably wicked and evil.

Bernie Sanders and Dianne Feinstein openly declared their disdain for traditional Christians holding high office.  CAIR, one of our country's top Islamic organizations, proudly declared its support for keeping traditional Christians in the same place they are in most Islamic lands.  All notions of reality are being thrown out by 'scientists' looking for the next handout from agencies and movements passing out the money on the condition that science proves reality needs thrown out.

Now we're seeing the end of that long road mentioned on CSPAN all those years ago, where those Marxist inspired Lefitsts are coming clean and admitting what we all know.  They're simply carrying on the dream of the 20th century Communists; a dream that involves destroying the United States, burning its documents to the ground, and eradicating the moral and legal traditions from the Christian West, along with the Christian faith that undergirded them all.

And the most amazing thing?  Increasingly they're boldly admitting it, with full knowledge that the institutions that should be protecting us and our heritage are part of the movement to destroy both.  I guess we can say at least they're admitting it.  At least they're saying they want America as we understand it to be eliminated and rebuilt.  And given the love that Marx was shown on the anniversary of his birthday this year, I think we can put the pieces together and figure where they want it to go.

Oh, one more thing.  If your answer is 'But Dave, it's just one opinion piece.  In one of our flagship news outlets.  By one of many organizations that seek the same thing.  That echoes what was said almost 20 years ago', consider this.  I can still remember the first time major news outlets gave a platform for those fringe radicals who were saying they wanted a day when two homosexuals could be legally married.  Sounded crazy, right?  Of course many said that such a thing could create a crisis for liberty where religious rights are concerned.  Naturally they were laughed at for being the paranoid homophobes that they were.  But think on that.  How fringe and crazy it seemed when the first news outlets gave that idea a platform.

I'm not saying America is heaven or the Gospel or God.  But it's been a right fine country on this fallen planet, and many today - including those who seem to hate it and want it dead - have benefited from it like no others.  Have we done the best with our freedoms?  No.  Have we had our sinful movements?  Like everyone else.  Could we Christians have been more zealous while being free?  Sure.

But before we go and flush it down the pipes of history, we better think real hard about how unique it was, and what the odds are that another movement like the American experiment will rise any time in the next couple thousand years.  It won't be like getting a bad haircut.  If we don't like the world without America in it, it won't grow back.  We owe it to our posterity to ponder that fact.  To those who have been given much after all.
Posted by David Griffey at 11:00 AM

Email ThisBlogThis!Share to TwitterShare to FacebookShare to Pinterest
Labels: Left and a New Communism, Our Post-American Nation, The Coming Storm, The Decline and Fall of the American Dream