May the Lord protect faithful Catholics from the pope

By now many have heard the news that Pope Francis has fired yet another salvo at the Latin Mass.  I went to find defenders of Pope Francis trying to spin this, but haven't found any.  In fact, among those I often went to in order to hear 'the other side' regarding support for Pope Francis, I've seen little in recent weeks.  Most defenders seem to have dropped off after President Biden announced to the world that Pope Francis sees a rabid pro-abortion politician as a model of Catholic fealty. I guess that is hard to defend unless you're a post-Catholic modernist.

Sometimes it's worth remembering that in the days surrounding that first Christmas, the religious leadership was likely no more inspiring than many see in Christian leadership today.  A very unpopular 'king' ruled over the land, but in clear obedience to the power of Rome.  Rome itself had recently seized control of the region and the people.  Things looked dour.

Like today.  Many are abandoning the Faith because I fear the faithful sparred with the rising modern secularism from a point of naiveté.  They believed there was common ground, and assumed good will and the search for objective truth from anyone but the faithful.  That was clearly wrong.  While we spent generations trying to find ways to evangelize the World, including changing and modifying anything we could to keep up with the World, it was successfully evangelizing us.

For those who have weathered the storm and strive to remain faithful to the historical, orthodox Catholic faith, future years will prove quite lonely.  As lonely as those disciples who followed Jesus between so many splinter groups who went this way and that in reaction to the spirit of the time in those days.

Just as thought as I muse on the days surrounding that first Christmas, and the troubling times in which we find ourselves today. 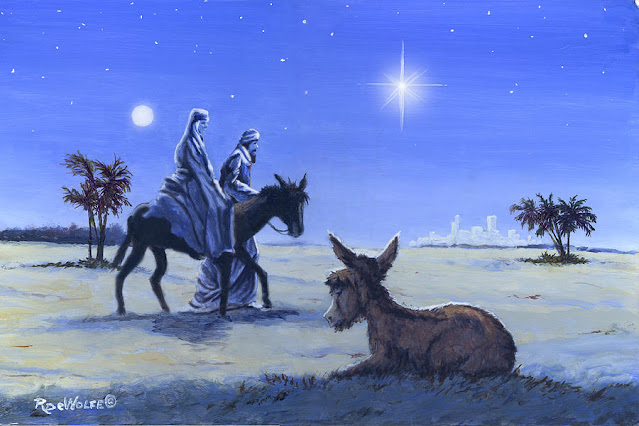 And Joseph also went up from Galilee, from the city of Nazareth, to Judea, to the city of David, which is called Bethlehem, because he was of the house and lineage of David, to be enrolled with Mary his betrothed, who was with child.  Luke 2. 4-5

Posted by David Griffey at 6:20 AM

Email ThisBlogThis!Share to TwitterShare to FacebookShare to Pinterest
Labels: Catholic Church and the Left, Christian Persecution, Musings, Religion in the World