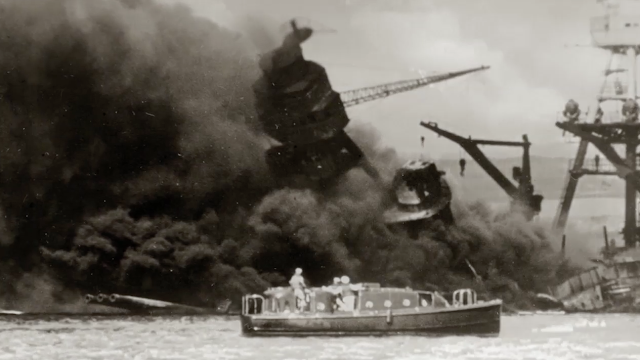 Early on here at the blog I wondered how much longer we will remember this day, or any part of the war for that matter.   Growing up, WWII loomed large in our national memories.  It was also being chipped away, with many pop culture portrayals of war vets being comedic: Archie Bunker types, constantly remembering the olden days and talking about war stories, to rolled eyes and sighs.

Part of the problem was that by the 70s and 80s, when gore and violence and 'realism' were becoming the norm in visual media - not to mention sex - it left many old war movies, and war documentaries, looking rather tame and dry by comparison.  What was Fighting Seabees compared to Platoon?  What was Why We Fight next to The Deer Hunter?  It led to a college roommate saying that while wars are no doubt bad, Vietnam was worse than any war in history.  After all, in our generation, it was the first one to look 'real' on film.

There were other reasons no doubt.  I don't think it was an accident that, growing up, the war was downplayed and critiqued.  In schools, by my college days, unless it was a course in WWII, we mostly focused on the European colonialism that was omnipresent, the embargos, the Japanese internment camps, the propaganda and sexism and segregation and, of course, Dresden, Tokyo and the A-Bombs.

In it all, however, Pearl Harbor was the only day other than D-Day that got regular play.   Each year we would be reminded of that date that was to live in infamy.  For some reason, that still resonated.  Less and less each year, but it was still mentioned.  At least until recent years.  Today is the 80th anniversary, so we'll likely hear more than normal.  Within a decade, it's unlikely we'll hear more than an aside.

But today, we remember.  We remember a day when the Japanese hoped for the results that the terrorists on 9/11 achieved, and that's the defeat of the West and America.  The generation that worked feverishly to move past the days of that Greatest Generation achieved their goal, and laid the groundwork for defeat and decline that their parents were willing to fight and die to avoid.

Speaking of old clips and films versus reality, there are few more nauseating war movies than 2001's Pearl Harbor.  A hot mess that.  It tried to weave a Titanic storyline with Pearl Harbor references.  It ended up a dumpster fire.  One reason was the lack of attention to detail during the attack sequences.  Ships that bore no resemblance to the historical counterparts.  Effects that looked more at home with Loony Tunes than an A-List war film.  The explosion of the Arizona was especially egregious since we actually have that sad moment on film for all time to see:

When you consider how large a battleship is, that explosion is stunning.  If you look real, real, real close, the explosion is so massive that it actually lifts the ship up out of the water.  When the ship drops, it creates  minor tsunami; a wall of water about ten feet high that came crashing up on the banks of Ford Island (before about the .10 mark).  Someday Hollywood may do it justice.  For now, the best cinematic treatment remains also the driest war movie of all time, Tora, Tora, Tora.  It's a movie that shows why movies have to cheat and rewrite the history for dramatic purposes.  But its attack scenes try, with some creative liberties, to stick to the actual events the way they happened.  If you want to watch a movie treatment of the events on that sunny Sunday, that is about the best you can get.

One more memory.  Back in the early 00s, I was attending a local Irish Festival we used to visit each year with the kiddos.  The usual Irish festival trappings  were there, including booths and tents with this to buy or that to look at.  One of the tents was an 'Irish Heritage' tent, where you could look for things that might point to your Irish roots.  Much of my family came from Ireland, with County Sligo being a major stomping ground for my ancestors.

Anyway, while we were there, I saw an elderly man looking at one of the tables.  He had one of those 'Vet ball caps' on.  I maneuvered my way around, just to see what it said, who he served with, what war.  And there, on his cap, was written USS Arizona.  It took my breath away.  But I feared it would be tacky to run up to him like a groupie and assail him when he was minding his own business.  So I let it go.  I hate that I did that.  I wish I would have just gone up and shook his hand and said thank you.

Posted by David Griffey at 8:27 AM