Using your children as liberal lab rats is all the rage

Even at Christmastime, per this gut wrenching article at Today. 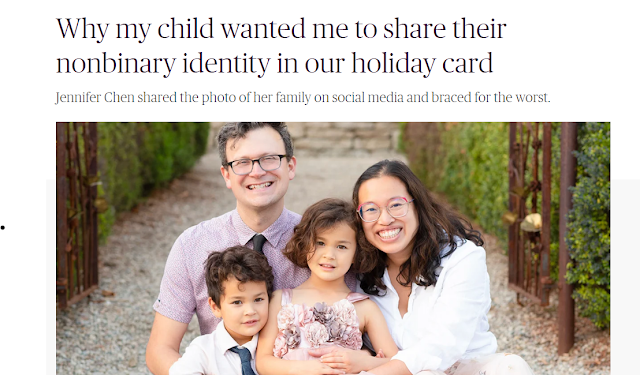 Wow.  In their Holiday card no less!  Because a child too young to use a public bathroom alone can decide she's opposite of her body's gender and it's gospel truth.  This is a demonic madness driven by Hell, and the children being dissected and mutilated to slake our sense of pride are the victims.

Note, by the way, the sleight of hand.  When I was growing up (1970s), we were taught that girls wearing skirts and boys playing with toy soldiers were all due to subjective gender role conditioning.  There was no objective reason for women to wear skirts or boys wear pants.  That was all because of social conditioning.  Note in the story that it was the girl not wanting to wear a skirt that started this.  Not that the skirt was a culturally conditioned expectation that could be solved by wearing pants.  Nope.  It can only mean that not wanting to wear a skirt must mean you're really a man.   We will deserve everything future generations say about us.

Nope.  We have to play Frankenstein with an entire generation.  Will there be generations as horribly stupid and evil as ours in the future?  I hope not.  We're fast on track of surpassing everything that ever came before us when it comes to terrible.

Tell me we're the generation with the right to condemn anyone  in the past.  At times I almost feel bad trashing Nazis.  Unlike them, we have them as our examples to learn from, and look what's happening.  It all makes me remember that the first Christmas was not a Hallmark movie.  It was a sad and insignificant event in a wide world of war, killing, oppression, slavery, corruption, and hopelessness.  We merely learned that out of the world in that day with all its problems, that one small event was the one that mattered.

Grumpy Note:  It was maddening to read the article because the parents insist on referring to their child in the 3rd Person Plural.  It took me a few to figure it out.  I kept having to go back and reread what I read thinking I missed something.   Well done mental health industry.  Make reality a state of mind and day to day living an insurmountable obstacle achieved only by counseling at 80.00/hour or prescription medications.   All while suicide, drugs and depression continue to go off the scale.  Someone, some day will have the guts to call out this farce for what it is.  Sadly for these children, today is not that day.

Email ThisBlogThis!Share to TwitterShare to FacebookShare to Pinterest
Labels: The evil the Left does, The REAL American Holocaust