Mayor Eric Johnson gets it

Mayor Eric Johnson, Democrat, mayor of Dallas, understands reality.  That is, there are obviously racists in the Democratic Party.  Duh.  Of course there are.  Racism can be anywhere and promoted by anyone, including blacks.  That should be like saying oxygen exists. 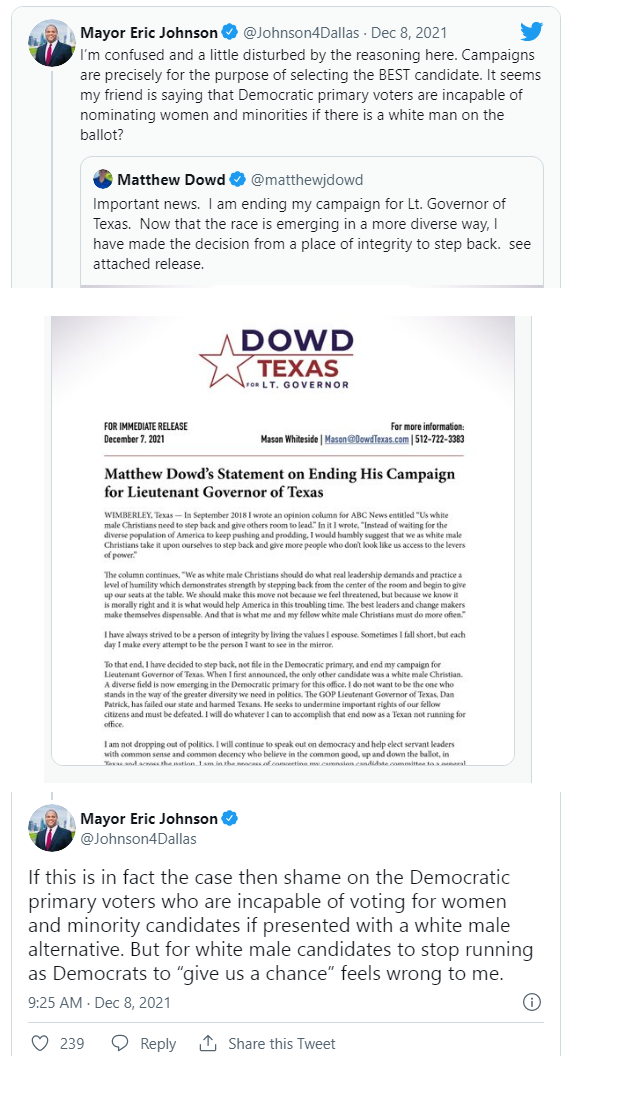 It's a testament to the stupid of our most educated generation that people actually believe good and evil exists along purely Red State/Blue State lines. You can thank the news media for that.  Nobody does 'divide people up into categories and label them accordingly' better than the press.

I doubt most really believe that.  When my former ethics professor David Gushee said history is divided between the good people on the Left, versus the baddies on the Right, I can't believe he really thought that.  It's just convenient.  We live in an age of truth by convenience.  If it's convenient, it becomes true. Even if we know better.

Likewise, so many Christians who have aligned with the same Left they once openly condemned rest heavily on the premise that liberal Democrats are simply the beautiful people, or at least the better people, unlike Republican Nazis who are always stupid, evil and wrong.  Again, I can't believe they really think something so stupid and demonstrably false.  It's just a convenient excuse to justify aligning with something they once labeled as evil or dangerous.

The problem is, to keep such a stupid and false narrative - that Blue is beautiful, Red is Satan - one must indulge in some pretty underhanded and duplicitous wrangling. Chief among the tricks to ignore grave evils - such as racism - when it doesn't uphold this little lie of racism on one side of the tracks only.  Sure, the odd minority might be hurt or even killed.  Sure this or that person might suffer.  But the justification for allegiance must be maintained, so turning a blind eye to that inconvenient evil is necessary.

Note, this is not to say there are no racists in the Republican party.  Or that conservatives can't be racist.  Or that we can't sometimes embrace ideas that are prejudiced against others without realizing it.  All of these things are obviously true.   One of the strengths of liberalism has been to point out problems or flaws that obviously exist, but then run forward with solutions that may not be as obvious.

And it's not to say anyone - conservatives or Republicans or whoever - can't fall into the trap of tribalism and turning blind eyes to the problems in your own camp.  But this is different.  This isn't even willful blindness. It's become a mandatory strategy to immediately downplay, ignore or deny grave evils or human suffering that challenge the stupid idea of Blue Good/Red Bad.  It isn't refusing to admit the evils because we can do that sometimes.   It's having to not only deny, but attack people trying to fix the evils, because the allegiance depends on the lie, and the lie must be upheld at all costs.

Email ThisBlogThis!Share to TwitterShare to FacebookShare to Pinterest
Labels: Identity Politics, Racism, Stupid is as Stupid is