And more courageous than most who wear the label 'pro-life advocate.'

The Pro-Life movement, which is not a heresy, has certainly got its work cut out.  We live in an age where old understandings of human life and its value are being overturned by forces with no concern about human life or its value at all, unless it befits the individual in question.  Hence the nations banning capital punishment are generally the same ones falling over themselves to broaden abortion rights, suicide rights, and flirting with euthanasia for the worst of these. Those who align with this modern culture of death are left with repeating the lies and slanders used by pro-abortion activists against those who would protect the least of these.

One lie is that pro-lifers don't give a rip about poor mothers or starving babies.  As much as I've asked for stats to back up that claim, I've never had anyone provide me with the data to prove it.  And as if to make sure that lie is shown for the BS it is, Ms. Klassen does yeoman's work making sure mothers-to-be of any stripe are taken care of and new mothers and new babies are cared for to the best of our abilities. 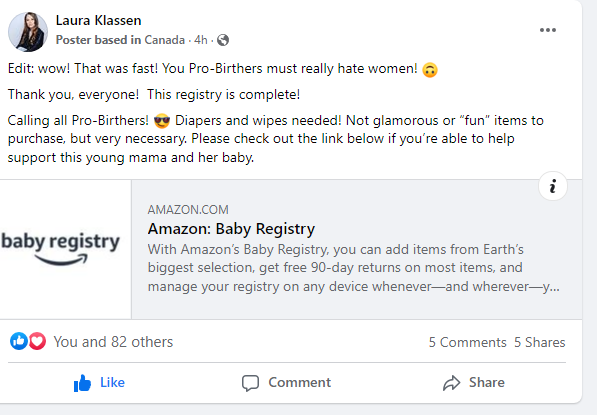 I don't know how to link to the Amazon page.  Here is a link to her Facebook account, and perhaps you can go from there.  It might be a widow's mite.  But it's nice for Christian allies of the pro-abortion movement to remember Christ was rather silent on Rome's various measures used to maintain the Pax Romana.  He did, on the other hand, have great praise for that widow who gave what she could to the cause. So as we celebrate that birth of births, here's a chance to help other births that are precious in the eyes of God, even if they rank lower in our modern godless nation.

And just because these little gems say what most religious leaders are scared to say, here's another reminder of Ms. Klassen's fine (and witty) work for life:

Posted by David Griffey at 9:10 AM