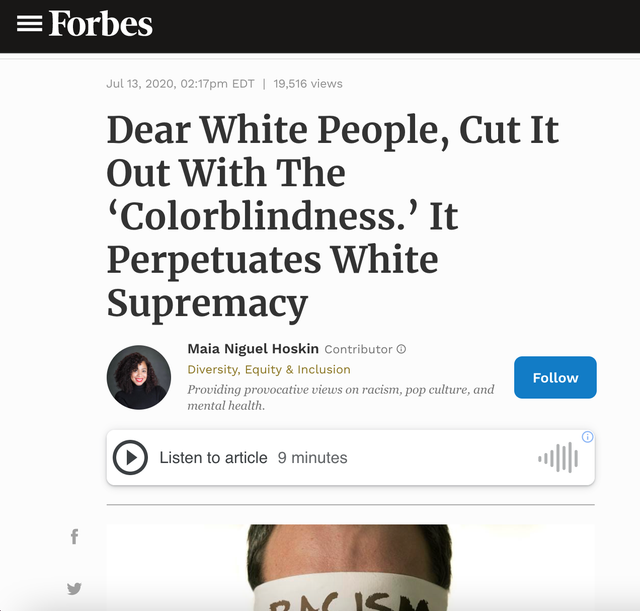 The Left's whole 'Let's talk about whites the way Nazis talked about Jews' fad is picked up by Forbes.  That publication has long been associated with corporate interests.  Which is about right.  Wall Street and Madisen Avenue have figured out that destroying the Christian Western tradition and the American Experiment is where the money is.  Likewise, white-hate, prejudice, racism, bigotry against all the right ethic groups will increase that all important bottom line.  Expect more of the same.

I was schooled by a philosophy professor some time back over my assertion that the Left is as Nazi as communist.  He said I'm wrong.  Sure, it's a myth that there was no racism in the Soviet  Union or other communist states.  But like most things communist, it wasn't because of deep seated beliefs.  The Nazis, on the other hand, really believed in the racial inferiority of Jews and other ethnic groups.  For the communists, they believed it if it benefited communists to believe it.  If not, then any persecuted group is fine and dandy, let's be friends.

That's the Left today.  They don't really believe in the racial inferiority and vileness of white people.  It's just convenient.  Convince people that anything born of White is default evil, then anything in the way of the communist juggernaut can be dismantled if it can be linked to White.  That includes such troubling ideas as freedom of speech, liberty, equality, the Golden Rule.

Though I will correct the professor on one thing.  My sons who have gone through universities today say he's only right about those old time communist leftists.  They probably don't believe it any more than they believe most things they say.  But younger radical leftists?  From what my sons say and have shown me, these youngster leftists believe the inherent evil of White with the blind zeal that the Hitler Youth believed about Jews.  The sooner 'whiteness' is wiped off the planet along with everything it tainted, the better off humanity will be. So say young white radical leftists.

Email ThisBlogThis!Share to TwitterShare to FacebookShare to Pinterest
Labels: Decline of the Christian West, The evil the Left does, the Joy of Racism on the Left