From simply the best comic strip of all time, Calvin and Hobbes: 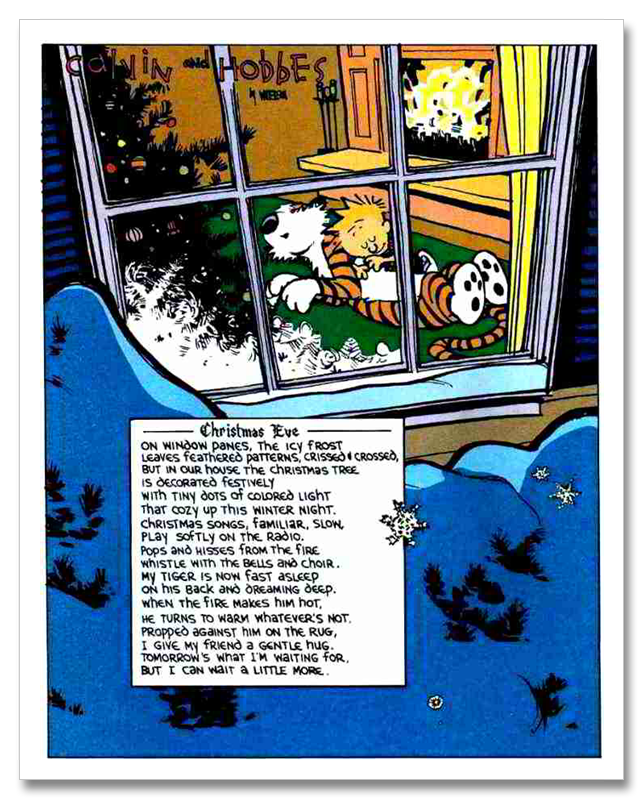 No other Christmas panel ever evoked like that.  True, it's not religious in any way.  The strip usually wasn't, and avoided taking sides when religion was mentioned at all.  But it captured perfectly the sentiment of children everywhere the night before the big Day.

I've never felt that it's wrong to have worldly customs or attempt to enjoy life in this world wrapped around the Sacred. Ours is an earthy faith, and as long as things are kept in perspective, I've always thought the natural bonds of human interaction and the traditions they bear have never in themselves offended the Almighty.

Nonetheless, it wasn't difficult to see we did lose perspective as a nation, a society, a civilization.  The panel above would have come out in the late 80s to early 1990s.  By then we were already mighty secularized, but the move had not gone from non-Christian to post-Christian yet.  Links to the past were still in our cultural bloodstream.  You could expect most commercials of the day to look like they were produced at any time in the previous eighty years. Not by the end of the 90s.  By then we were clearly moving from post-Christian into the early stages of anti-Christian.  I can see why some began to think that anything secular was some intrusion upon the sacredness of the season.

As I've said before, my dad was a railroad engineer.  As such, his schedule was pretty random and at no point in the year could we expect him to be home at any given time.  Birthdays, Thanksgiving, Memorial Day cookouts were whenever he was available.  Only Christmas, by the later years when he had seniority and seniority mattered, was available to be planned around.

That's likely why of all times of the year, we cram as many traditions into this season as we can.  In fact, the whole of Fall until the end of February (our anniversary) is our family's big scene, with Christmas as the crescendo of activities.

So speaking of all this time to do things, I'll be scarce in the coming days, owing to those activities.  The boys are still at home, but my one son's relationship with his girlfriend has begun to include whispers of long term commitments.  My oldest is eying graduate school.  Whether it will be online, nearby or somewhere else remains to be seen.  I think he's warming to online schooling, we'll see.  Meanwhile, my other son is bucking for a promotion and will take and go where it takes him if the opportunity arises.  Our youngest, of course, is here for the next few years in any event. As is, God willing, my mom.

Perhaps one or more will have moved out by the end of the upcoming year. Perhaps they won't. But we all know when it comes to our little family homestead, the evening is near and the days are nearly over. So that precious commodity of time will be spent with the gang as we enjoy the old traditions, do so with new friends and relationships, and even add a couple new to the batch.

So have a blessed and merry Christmas.  I'll pop in and out throughout the twelve days.  TTFN, and God bless!

Speaking of new traditions, we had our go at a gingerbread house, at the request of our youngest.  We cheated, it was a ready-made kit.  We tried doing it from scratch, and the lesson of the house built on the sand came to mind.

Posted by David Griffey at 6:30 PM