Why we're in trouble 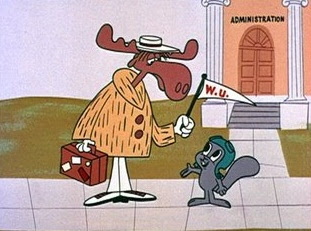 Because we look at our education systems solely as a way to keep up with the world in math and science and to make money.  We promote STEM exclusively (that's Science Technology Engineering and Math).  Schools I've experienced devote probably 80% of their focus to the hard sciences, technology, innovation.

Don't get me wrong.  Despite some claims that I begrudge everything from round wheels to the latest iPhone, I don't.  Really.  Innovation can be good, wonderful.  It can solve problems.  Of course it can also create new ones.  Seldom in life are there cases where we don't have to trade one thing for another.  But still, advancements are good.  So is math.  So is science.  So is engineering.

But here's the thing.  STEM, if I may borrow the acronym, is about what we can do.  The Liberal Arts, on the other hand - literature, history, philosophy to name a few - are about what we should do.  We're already in a time and place where people spend more time fretting over Beyonce's lip-syncing, or anything else she does with her lips for that matter, than the growing disparity of wealth in our nation, our country's declining role in the world, emerging problems in Africa and Asia, or any one of a thousand important issues.  Let alone contemplating moral evils and truths, eternal salvation or any of that.

So it doesn't come as a shock that we read articles reminding us of what college majors are pure poison, based purely on earning potential.  Top of the list?  Liberal Arts, the discipline that's supposed to help us, among other things, learn not to sell our birthrights for bowls of stew.  I know, some of what passes for liberal arts today in many institutions of higher education has less intellectual value than an episode of Rocky and Bullwinkle.  But in it all, there's till that clarion call to seek wisdom.  Intelligence, the domain of math and science, is important, and every time I go to the doctor I'm thankful for those who place value in that realm.  But wisdom, that gift which Solomon asked from God, is the stuff that gives us pause.  Intelligence asks can it be done, wisdom asks should it be done.  To decide, based on profit alone, that it's better to just ask what can be done, because that's where the big bucks are, doesn't bode well for future generations, at least IMHO.  That's all.
Posted by David Griffey at 9:55 PM