How not to be a Catholic stereotype

It's important to remember, as Catholics, that much of the world sees a rather diabolical portrait of our Church as demonstrated by the above picture.  It's from the 1982 made for TV movie Ivanhoe, staring the legendary James Mason and 80s TV heartthrob Anthony Andrews.  It's good.  It doesn't discredit Scott's actual work, and keeps to the basic themes and characters.  This being the early 80s, the idea of prejudice and bigotry are put front and center, and you don't really have to imagine who the bad guys are.  Of course the wily Prince John, forever consigned to movie villainy, is the main antagonist, as is the brutal and sadistic Reginald Front de Boeff.  But when it comes to pure evil, I mean the sort of evil that surpasses Darth Vader evil, you don't go any farther than the movie's portrayal of Lucas Beaumanoir, the Grand Master of the Knights Templar who is pictured here.

He's mean.  He's cruel.  He's a zealot.  He's a witch hunter who doesn't seems to believe a rip of it, but revels in the power to torture and maim and kill.  He appears to take unholy delight in watching Isaac squirm under his feet, as he first tells him that Rebecca, Isaac's daughter, has been burned at the stake, then tells him she is to be burned unless a champion can be found (I'll leave the gentle reader to figure out just who the champion will be).  In short, he's what most people outside of the Catholic Church (and a few within the Church) envision when they reflect on what Catholicism is all about.

When I was a pastor, I used to tell my congregations to avoid living up to negative stereotypes.  I realize there really isn't anything you can do about stereotypes.  People will develop them and apply them, usually to groups they don't like.  Still, you can try to avoid living up to them.  Therefore, when it comes to reflecting on what the world thinks about Catholicism, consider this: don't rush to condemn.  I don't mean we shouldn't look at things, or call a spade a spade.  It doesn't mean we can't call good what it is, or evil what it is.  It doesn't mean we shouldn't pray for justice.  It does mean we should exercise restraint. We should avoid the appearance of little inquisitor wannabes. Even if we know in our guts someone is guilty; even if we know, for instance, that three police officers causing the death of a young man with Down Syndrome is an appalling and inexcusable breach of professional responsibility at best, we should still wait and see what the facts of the case actually are.

And no, we can't just appeal to the media's accounts of what happened.  That would be the media that has gone a long way in convincing the world that anyone who thinks about the Catholic Church should envision this image: 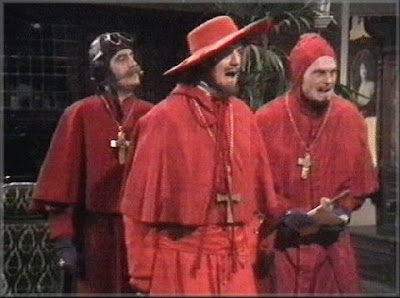 As Catholics we should pray for the victim and the victim's family and loved ones.  We should pray that justice is done, and that God grant peace to the families of those who were party to this man's death.  We should expect proper payment to be made, jail time if it is deemed appropriate,  termination from the job, whatever.  Or, if the facts should emerge, innocence.  But what we shouldn't do is jump on the bandwagon and sound as if we have the word of the inerrant media, and it's time to poll-vault over all the due process and evidence garbage and get straight to the execution.  Good for aiding anti-Catholic stereotypes, bad for actually being about the presence of Christ in the world.
Posted by David Griffey at 12:35 AM