The Feast of the Presentation of the Groundhog 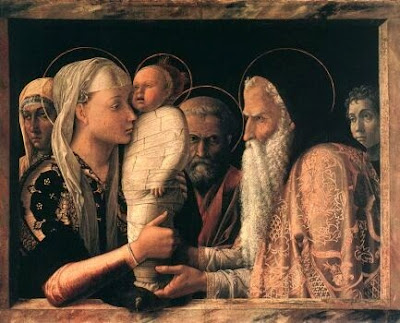 I suppose in some desperate attempt to rid itself of those Roman shards, our nation did the best it could by replacing the Feast of the Presentation (or historically Candlemas) with, well, a rodent.  If secularists and other cranks can warp history by saying that Christmas was just a cheap steal from pure Roman celebrations, I can assume that Groundhog Day was just a cheap ploy to avoid what was once an important feast day in the Church.  For Catholics, this marks the 40th day since Christmas, when the temple priest held the baby Jesus up to look for his shadow and see if there would be a short winter or not.

Really, it's the presentation of our Lord in the temple.  More traditionally, it also marked the obedience of Mary to the Mosaic law, and some Catholics prefer to keep the focus there.  But as Mary should always point to Jesus, the I like the point of Jesus being offered up in obedience to the organized religion of the day.  If I had anything I could take away from this, and if we had such things in my Protestant evangelical days, I would certainly use this as a smack down for any of that "I love Jesus but hate religion" rubbish. Nothing screams 'why learn when you can rant instead' than the banal 'I'm spiritual, not religious'  And nothing dispels it faster than a good soaking in today's readings.  And it didn't end when Jesus was out of diapers.  He, like the apostles who served him, would carry on as devout Jews in their own way.  As Jesus said, he came to fulfill the law, not abolish it.  Something our 'religion of me' generation would do well to remember.


The feast was first observed in the Eastern Church as "The Encounter." In the sixth century, it began to be observed in the West: in Rome with a more penitential character and in Gaul (France) with solemn blessings and processions of candles, popularly known as "Candlemas." The Presentation of the Lord concludes the celebration of the Nativity and with the offerings of the Virgin Mother and the prophecy of Simeon, the events now point toward Easter.

"In obedience to the Old Law, the Lord Jesus, the first-born, was presented in the Temple by his Blessed Mother and his foster father. This is another 'epiphany' celebration insofar as the Christ Child is revealed as the Messiah through the canticle and words of Simeon and the testimony of Anna the prophetess. Christ is the light of the nations, hence the blessing and procession of candles on this day. In the Middle Ages this feast of the Purification of the Blessed Virgin Mary, or 'Candlemas,' was of great importance.

Posted by David Griffey at 9:31 AM

Email ThisBlogThis!Share to TwitterShare to FacebookShare to Pinterest
Labels: Catholic, Religion in America