Just thought I'd throw that out there since my boys attended a Catholic Youth event they said had more racy songs than a secular dance party.  Sometimes I must remind Catholics that few in the seeking world are drawn to God through a label that says twist cap to open.  I know, prudes and puritans.  But there is another extreme.

Anyhoo, we approach this Ash Wednesday with a fast the way we did things downtown in Protestant land.  In the waning days of my Protestant life, such quaint Catholic pastimes as Advent, Fasting, and Meditation were becoming all the rage, especially in the Evangelical setting in which I ministered. It was that tension between recognizing the rich and vibrant traditions embedded in historical Christianity while not being or looking too Catholic.

Fasting was one of the last disciplines to become faddish before I left.  Now fasting in the Catholic Church has been a puzzle for me.  According to the literature we receive, fasting consists of:

Limit of one full meal on these days for all between the ages of 18 and 59 inclusive.


Now, to be honest, there have been times when we were doing good to have one full meal, times being what they were and schedules and pace of life and all.  Many's the time when the best we could scrape together was the equivalent of a full meal on even the highest feast and celebration days of the year.  So how is this a fast?  We'd have to eat more than some normal days to register a full meal! 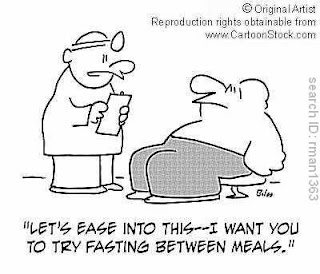 Well, that's where Protestants come in.  Leave it to them to pour high octane into a discipline.  In most of the fasting literature I read those last years of ministry, fasting was just that: fasting.  Yes, for age, health, and unique circumstances there were obviously ways around straight fasting.  But fasting was that: don't eat.  Liquids and even juices if need be, mostly to stay hydrated.  But don't eat.  And they spoke of having fasting periods, encouraging (within reason) days of actual fasting.  If it got too crazy, consulting with a medical specialist was encouraged.  But the point is, fasting was just that: fasting.  Maybe there was a time when Catholics fed so that a mere single regular meal was a sacrifice, but times being what they are, I can't imagine it.

Not to boast or say I'm a million times as humble as though art.  It's just to say we've tried the Catholic approach a few times over the years and, when all was said and done, felt like we hadn't fasted at all.  When we have actually fasted in the hip new Protestant way, however, we definitely knew it.  At times it felt cleansing, at times agonizing.  But it was a fast, and one I can't help reflected more the understanding of fast when Jesus tells us what to do when - not if - we fast.   After all, we fast on a day when we are reminded meménto, homo, quia pulvis es, et in púlverem revertéris.  Still:


Moreover when ye fast, be not, as the hypocrites, of a sad countenance: for they disfigure their faces, that they may be seen of men to fast. Verily I say unto you, They have received their reward. But thou, when thou fastest, anoint thy head, and wash thy face;  that thou be not seen of men to fast, but of thy Father who is in secret: and thy Father, who seeth in secret, shall recompense thee.