World War II gets all the press

So we often forget just how devastatingly horrific was the First World War.  In terms of battlefield deaths, the numbers rival the Second World War.  Civilian casualties in WWII mounted, however, as genocides and bombing raids multiplied the numbers a thousandfold.  The era of Total War reached its crescendo in the 40s, capped off over Hiroshima and Nagasaki.  But even that didn't account for all the numbers.  The civilians killed in death camps, and in the mass destruction of fully mechanized and industrialized warfare also accounted for the numbers.  Plus in the USSR, it's impossible to know just how many of the 20 million died solely as a result of the Nazi presence, and how many as a result of the Soviet Union's own policies and strategies.  Add to that the similarly eerie question about the millions killed in China (how many because of China vs. how many by Japan), and the numbers finally reach that level that still seems mind-boggling.

But on the battlefield, in the trenches, the casualties of WWI still rival those of its second act.  Millions died when seldom before had such figures been seen.  Only in China, during revolutions of the past, or during periods of conquest such as under the Mongol Horde, and that over the course of centuries, did the casualty rates reach into the millions.

But this was industrialized, technologically advanced, modern post-enlightenment Europe.  This was the apex of the hopes and dreams of a humanity that had tossed out the old superstitions, the antiquated ideals and beliefs, and the pre-modern agrarian ways of non-civilized humans.  This was Europe.  The point man of history.  It was supposed to look like this: 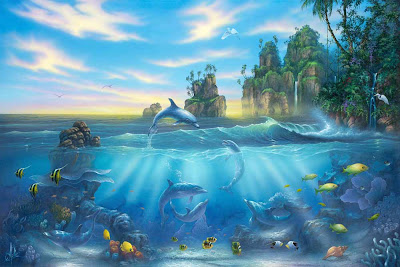 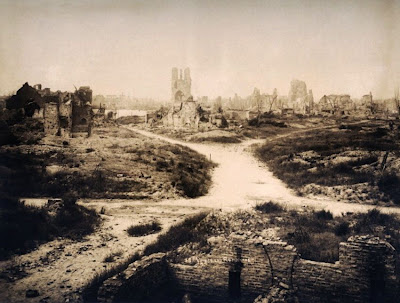 The sudden wake-up call, that began to creep in as the Titanic slipped beneath the water of the Atlantic, should have brought about major changes.  But, alas, humans tend to follow the motto 'why learn from history when you can repeat it instead?' Lessons were learned alright,  mostly by the Germans and to some extent the Japanese.  The idea of the Blitzkrieg was, itself, the result of Hitler having learned how not to fight a war.  It's worth noting the hardheadedness of people: that the Germans would capture most of Europe before the rest of the world admitted the old stuff wasn't working.

But that's the way it goes.  As we plow forth, pushing boundaries regarding technology and digital communications, genetics and just how long can a parent wait to abort a child after it's born, it's worth noting the arrogance of Europe exactly 100 years ago.  Titanic had already fired a warning shot, one that was ultimately ignored.  We know many of the bold new inventions are bringing with them as many banes as blessings.  Will we learn in time?  Europe was already beginning its downward spiral when Archduke Ferdinand and his wife were murdered, or so many historians argue (and I agree).  We know America is following the same trend.  What will historians write about our time in a 100 years?  Will they look back as we do today and ask, "Why, oh why, did they not learn and see what was obviously coming around the corner?"? Makes me wonder.  Don't think I don't.
Posted by David Griffey at 7:34 PM

Email ThisBlogThis!Share to TwitterShare to FacebookShare to Pinterest
Labels: History, What We Learn from History