In Gold We Trust

Until the GOP can overcome this image: 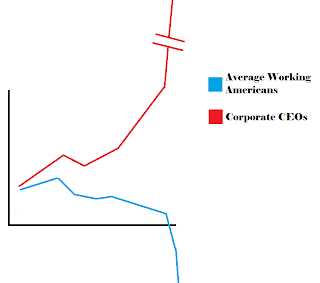 They are going to be a lost voice in the wilderness increasingly ignored.  I'm not saying the above hastily improvised salary graph is accurate.  But it's the impression a growing number of Americans have of our current economic condition.  I'm aware of the fact that any job I get, even though it requires a college degree and years of experience, will have less spending power than a kid bagging groceries would have when I was in school.  So it's difficult to fall in behind conservatives who still insist if we just make it easier for the wealthy to get wealthier, their natural generosity and giving natures will make all things right with the world.  I fear a growing number of Americans are sharing that reluctance to jump back on the old conservative GOP economics bandwagon.
Posted by David Griffey at 6:41 PM