In praise of Maze Craze

For nostalgia's sake, I purchased an Atari pack for the old PlayStation II some years ago.  It contains most of the old Atari games (Space Invaders noticeably absent) that came with the old 1600 console back in the early 1980s. As I said before, the year I got the Atari system, 1980 to be exact, was as memorable for me as the year Ralphie got his BB Gun.

So after dinner, my 12 year old pulled out the old Atari set and asked to play it.  We had a go at Slot Racers, then went over to Maze Craze.  Both involved navigating mazes, though the Maze Craze game had decidedly more difficult mazes.  Plus, those mazes were always random.  Who knows?  Perhaps if I had played the game enough, I would have found a pattern eventually.  But for what I invested in it, they seemed ever and always different.

The point was, you were more or less a robber, running though a maze trying to evade the police.  You could play with two people, and that was most enjoyable, as you were both partners and competitors.  It had the old early game system beeps and buzzes for sound effects, and the actual characters were little more than small squares, with the two players having a little more detail.  In all, by today's standards, pretty crude.

And yet.  Somehow, in some way, it was both more challenging in some ways than modern games, and to be honest, more stimulating.  When I play Call of Duty, there's little left to the imagination.  I mean, at first it looks awesome.  The graphics blow you away.  But pretty soon, I realize that the game's environment, its world so to speak, is there, like a movie.  I mean, I can't imagine what the Death Star looks like - there it is.  Nor do I ponder what the desert might look like in Lawrence of Arabia.  It's there.  Not that that's a bad thing.  Done right - like Lean's Lawrence - it can pull me in and almost make me forget I'm sitting in broken down recliner in my living room, rather than standing in the vast Arabian wasteland watching Sherif Ali ibn el Kharish approach.

But, on the other hand, I use little of my imagination.  In fact, sometimes movies can almost steal my imagination.  So it's impossible to read The Godfather and not see Brando's cotton stuffed mouth, lurching his way to Oscar glory.  Nor can I read The Lord of the Rings without seeing some of Jackson's choices for bringing that world to life.  But at least, they still arrive in my mind's eye, rather than an image played out before me. 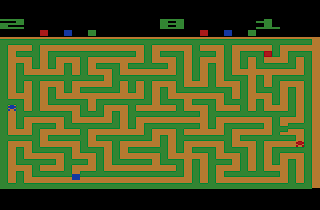 Today's video games, with all their glory, stimulate my senses, but differently.  Video games in those days were often very eye-hand coordination focused, my mind was left to fill in the blanks.  So it wasn't just dots that were trotting along, running through a bunch of graphic lines.  It was cops and robbers all over again, me as the thief darting through rows of crates stacked high in a warehouse.  Though the focus of the game was eye-hand, my mind still did the work needed to add color.  My imagination was, therefore, necessary to keep it from descending into mere dots and pixels.

Of course, video game designers quickly knew the value of helping those of us with somewhat stunted imaginations.  Most of the artwork on the old Atari game boxes outpaced anything in the game itself, and even as early as 1980, we knew it.  We knew that the graphics were crude compared to the box art.  We weren't stupid.  We understood that the picture on the box for Space Invaders was a million times more evocative than anything that would show up on our screens.  Our minds would have to join the two if anything other than moving pixels was going to occupy our time. 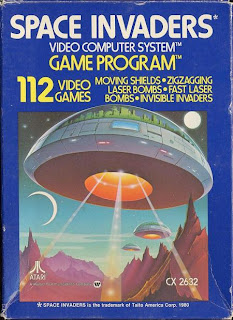 What we imagined was that in some way, in the future, things would look better.  They would look more realistic.  The possibilities were endless!  We would have forms of electronic entertainment that we couldn't imagine.  It's strange, and perhaps true with all inventions, but we knew it was only the beginning.  What I don't think we imagined was that as the graphics got better, as it went from squares to pixelated images to actual computer graphics to the breathtaking images on modern games, something would be lost.  That demand on our own imaginations, in a way that television and movies took away a bit of imagination from the story tellers of old.

Maybe that's why, in an age of almost limitless abilities graphics-wise, board games and other non-electronic forms of entertainment are still around.  Despite computer versions of RISK or Monopoly, there's still the old board games, their tokens in hand, the paper money on the side.  Maybe that's why I read that paper roll playing games are still popular (as popular as they ever were) despite so many advanced computer and video games based on that very genre.  Maybe it's why, despite everything that's out there, people still enjoy going to the library and curling up with a nice, worn and beaten book.  I don't know.  It just hit me as my son and I played a little trip down memory lane, with him taking on the roll of my best friend of yore, watching ridiculous blips darting about our television, while knowing that in my own mind, it was really so much more.
Posted by David Griffey at 9:35 PM