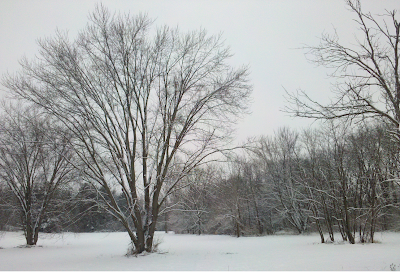 As a kid, I used to love winter.  Why not?  It meant that great non-committal end of the twelfth month winter holiday celebration was just around the corner.  It meant vacation!  Of course we only had about a week vacation then.  We had half day the day before Christmas Eve.  Then we came back the day after New Year's.  Still, a vacation is a vacation.   It never dawned on me that the first day back was a drag because there would be no more vacations until Summer Break.  Back then we had no Spring Break. We had Good Friday and the day after Easter and that was it.

But winter meant snow.  It mean snowball fights, building snow forts, building snowmen.  It was hot chocolate and cuddling up in a blanket watching Super Host's Mad Theater on Saturday afternoons.  If we were lucky, and the snow came near that rascally holiday whose name can no longer be mentioned, it brought a special magic with it.

And yet, for some reason, winter has decreased as autumn, and yes spring, have increased.  Call me Christian, but once I began to invest myself in my Christian faith, I came to love Easter   The first time I attended a sunrise service (common in Protestant denominations that don't have Easter Vigils), I was hooked.  From that day, back in 1992, I began to enjoy spring more than ever.  When I was young, spring meant blustery days and rain and mud and staying indoors.  It mean winter - and that Holiday - were done for the year, and with a December birthday, the next round of loot would be months and another school year away.  It meant that time I had to get through until Summer Vacation and Alice Cooper songs.

But now, for some reason, I tend to see the lilies more.  I see the sparrows and the flowers and the coming to life.  Perhaps it's because I connect the rebirth of Spring with the triumph over death and the new birth of the Faith.  Maybe it's because life and becoming new is more natural, with children changing and growing each year, and the growing realization that I'm closer to the end than the beginning.

Fall is still there, as I've said time and time and time again.  I still love it for the reasons I always have, though less for nostalgia anymore than the fun times with the boys.  I sometimes wonder if it, too, will fade when they have grown and moved on with their lives.  And when that happens, will Spring finally take its rightful place as the seasonal high point of my year?

Who knows.  Just a thought as I saw the above picture I took some weeks ago finally come through.  It was during the weeks of snow we were pelted with, and I took advantage to pull off the road and click a picture. You can almost feel the hushed silence.  Everything quiet.  Everything dead.  But spring is around the corner. Lent is already here.  We've been reminded of the dead, now we prepare for the living.  I'd like to think that's the real heart of my growing love for this once overlooked season that is fast becoming the time of year I yearn for more than any.

But who knows.  Maybe it's that now I have to drive in the snow, and I just want the hassle to go away.  You never know.
Posted by David Griffey at 8:17 PM