Trick or treat for Halloween

With this being the last day of September, and a full moon shining over the lands, we felt it was appropriate to launch into the beginning of the Holiday Season.  That, to the Griffeys, encompasses everything from Halloween season until the end of New Year's day, or now that we're Catholic, the 12th day of Christmas.  Some argue that it really lasts until Easter.  But certainly, this is the time when our family comes alive, and begins to get some of that excitement that comes with all of the holidays and festivities that will be thrown our way over the next months.

At first we didn't dive in until well into October.  But with the conflicting and competing schedules due to our boys being involved in multiple activities, we started moving the date to the first of the month.  Likewise, we actually start with 'autumnal activities' as early as September   Still, we reserve particular traditions that my wife and I began when we were first married, and carried on as we added to the numbers of our family. 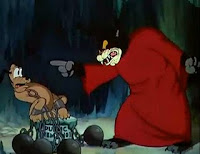 The order may vary, the things we choose to do or not based on a variety of things such as weather and money, but there are certain things we always, and I mean always, do.  First off is the kick-off special, typically reserved for the first of October, but again this year ending the month of September.  That is a special showing of an old Walt Disney VCR special called Halloween Haunts.  It featured three old shorts from the long ago days of Disney cartoons in theaters, preceded by a rousing video rendition of Grim Grinning Ghosts.  The first episode is Pluto's Judgement Day, a rather morbid reminder of the power that traditional religious ideals held on the population, as Mickey's dog Pluto dreams of being cast into Hell itself, due to his sadistic desire to torture kittens   After a mock trial by a host of felines  Pluto is condemned to the flames, until a real ember from the fireplace wakes him and makes him see the light of cat-love. 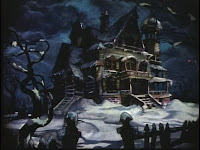 The next cartoon is Lonesome Ghosts, the cartoon that no doubt gave Dan Aykroyd and Harold Ramis food for thought, as a trio of underemployed ghost hunters are called to an abandoned mansion to purge the location of its spectral inhabitants   Of course the ones who called them were the ghosts themselves, but the joke is on them as the intrepid ghost hunters, who aren't scared of no ghosts, turn the tables on their hosts.  Finally comes Trick of Treat, the post-war celebration of the whole Trick or Treat fad that was exploding on the back of America's new found commercial prosperity.  Trick or Treat had always been around, but now with America's abundant wealth, it took on a new level of commercial emphases, and Disney, never one to miss the latest, spun this yarn of Donald's tricks and traps to cash in on the phenomenon 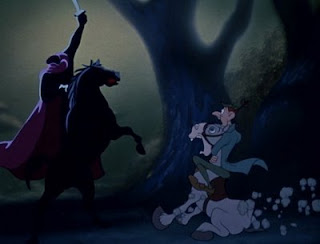 Finally, with time to spare and a youngster wanting more, we decided to pull out another Halloween tradition: Disney's Legend of Sleepy Hollow.  More faithful to the atmosphere and basic plot of Irving's short story than Burton's usual cynical and anti-everything take with Johnny Depp, Disney allows Bing Crosby to walk us through the story of Ichabod Crane, and his appointment with destiny at the business end of the Headless Horseman's blade.  Though not emphasized in the book, Disney adds plenty of Halloween trapping to give it an extra umph, with one of the absolute coolest songs in cartoon history, courtesy of Brom Bones.

So that was it.  Some homemade pizza (cheaper than store bought) and some decorating of the home, along with a little garden harvesting, and we had the definite feel of holidays a'coming.  As my oldest said, when we hear the theme to Trick or Treat, you just know the months and months of holidays that we have waited for have finally begun.

And with that, let the holidays begin!
Posted by David Griffey at 8:47 PM