The inscrutable lure of autumn 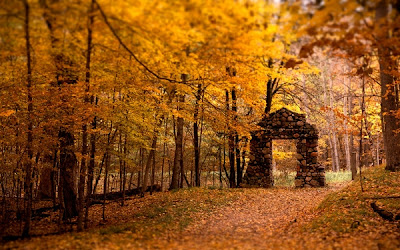 I've posted many times before that I love the Fall.  Don't know why.  I've thought  it could be connected to all those years of going back to school, or the colors, or the fun of the holidays that begin once autumn arrives.  Perhaps.  But over at a website called Grognardia, James Maliszewski reflects on another dimension of fall: The decay.  Now the website itself is one dedicated to the hobby of role-playing games.  That's probably most famously manifested in the game Dungeons and Dragons, though the website seems to focus on other things as well.

Nonetheless, he had a wonderful little piece here, in which he reflects on the 'fantasyness' of fall, and why so many things that are fantasy invariably have a 'fall feel.'  Perhaps there is some truth to that.  I always find myself more inclined to read The Lord of the Rings or Beowulf, or watch an old run of Excalibur or Dragonslayer or The Adventures of Robin Hood during the fall season.  Never really thought about it much.  When I did, I assumed it was because those older, Colonial or pre-Colonial periods were likely covered in school in the early months of the school year, when the leaves were red and orange and the cornstalks still dotted the fields.  When we learned of pre-industrial humanity, or studied Beowulf, or reflected on the Pilgrims of Plymouth Plantation, we did so alongside the latest football news.

But there could be another reason, with which Mr. Maliszewski picks up and runs.   It could be that there is a sense of decay.  A sense of that long defeat. A sense that time is passing, like grains of an hourglass and all.   That at the end of the day, we get older.  Nations get older.  Civilizations get older.  Fantasy abounds in all manner of ruin and decay.  Take the archetype role-playing game, "Dungeons" and Dragons.  Dungeons.  Not in the sense of a prison, but in a generic sense, a ruin.  Something that hearkens to a time before, when things were better, or at least different.

We can't help but feel a sense of foreboding.  The leaves fall, the crops wither, the grass browns.  What was once vibrant and alive is now in its decline.  Perhaps it's that, too, that makes Fall an interesting season, different than the others.  Spring is rebirth, Summer the pinnacle of life and growth, and even Winter is subdued, and dead, quiet and still.  But fall is that last gasp, when in one big burst of color, we get that vibrancy that sometimes comes right before death.  And something in us, something pre-industrial connected with the land passed down from our ancestors, kicks in.  And it's  that appreciation that makes a connection with Fall, and maybe why we, or at least I, turn toward other things that speak of decay, ancient cultures long gone, and ruin.

Who knows.  Like Mr. Maliszewski in his piece, I'm more or less rambling out loud.  But when I was looking for things of fall and found the article, it made me wonder.  It especially made me surprised that, when it comes to the sudden desire to reflect on olden times and ancient rhymes, I'm not the only one who gets a dose of inspriation when the frost starts covering the pumpkins.
Posted by David Griffey at 8:57 AM