Get out your hot cross buns: It's Roodmas 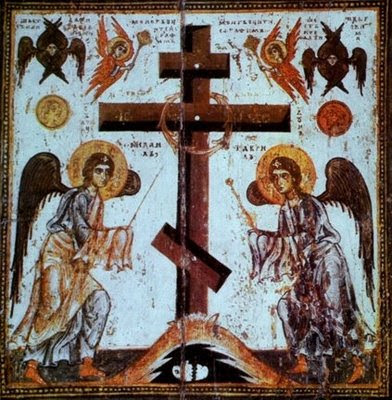 Roodmas?  Hot cross buns?  Yes, September 14 is not important because that is the day Francis Scott Key wrote the words for the Star Spangled Banner - though that is certainly noteworthy.  No, for Christians everywhere this is the day commonly known as the Exaltation of the Holy Cross. The term 'Rood' is from an old Anglo-Saxon term meaning Rod, but often used to signify the True Cross*.

The cross is big.  It is the symbol of the faith.  Catholics and Orthodox and all Christians of the historic faith, including not a few from some Protestant traditions, use the sign of the cross as a constant reminder of the power of the cross which symbolizes Jesus Christ and Him crucified, the sole object of St. Paul's preaching.  That's why Catholic cross themselves for a host of reasons:  Entering a Church, before and after prayers, at their baptism, traveling past a church (to honor Jesus in the Tabernacle), why the list is endless.  Catholics used to believe - and I personally think nothing wrong with keeping this up in light of the state of modern things - that using the sign of the cross was a ward against demons.

So there you go.  The Cross.  Reflect on it today.  Meditate on what it is and why it is important to the salvation and souls of all believers around the world, and indeed, all humans.  Eat some hot cross buns, and open up the Scriptures, which we are told repeatedly that Christ's Death, Burial, and Resurrection fulfilled, and see the power of where this promise of eternal life originates.  And next time you're driving by a church or cathedral, remember the old custom of crossing yourself.  It's a great habit to get into.

"For Christ did not send me to baptize, but to preach the gospel—not with wisdom and eloquence, lest the cross of Christ be emptied of its power. For the message of the cross is foolishness to those who are perishing, but to us who are being saved it is the power of God."

*By the way, the term 'rood' as cross was once a word by which people would swear, hence Shakespeare's Hamlet attests to Queen Gertrude, "No, by the rood, not so: You are the queen, your husband's brother's wife; And--would it were not so!--you are my mother."
Posted by David Griffey at 8:31 AM