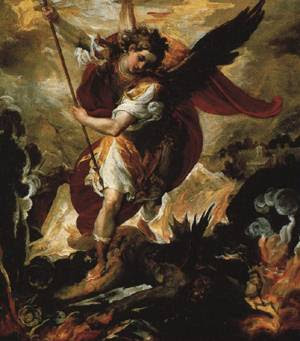 It's September 29, a date which for many ages in the Old Countries meant almost as much as Labor Day or Memorial Day does to most Americans.  It was a seasonal date, a time that signaled ends and beginnings.  There was a time when this was the beginning of autumn, and if I'm correct, English schools would set their calendars around this period.

Michael is, of course, one of the archangels.  It is Michael who is credited with defeating Lucifer.  For much of the Middle Ages, this day was a holy day of obligation, though the practice fell off in modern times, and in America at least, it is no longer such a day.  I'm not sure if it is even mentioned.  A shame, since it does help us remember that despite the media and the scientific explanation for everything, ours is still ultimately a struggle with the principalities and powers and rulers of this present darkness.  The demonic that is.  Sometimes I think that Bultmann was correct, that in our age of iPads and electric coffee makers, we have a hard time seeing beyond the wiring and the plumbing, the DNA and the molecules.

Still, it's a time that beckons us to think of the supernatural, the cosmic struggles, the powers of Good and the powers of Hell.  It brings to mind that we are near to that witching month, that month associated with decay and death, of hell and terror.  Though it begins with a bang, celebrating that saint of saints Francis of Assisi, it ends on the night of All Hallows, and turns out thoughts to the world beyond this one, beyond the reach of mere physics and chemistry and biological theories.

So get out the blackberry crumble (an old custom said blackberries were not to be picked before the old date of Michaelmas), make some apple dolls, and cook the roast goose (a gamy bird, we tried it once - we loved it better than it loved us), and say that old, traditional prayer that Catholic invoked for ages against the powers of darkness:


St. Michael the Archangel, defend us in battle; be our safeguard against the wickedness and snares of the Devil. May God rebuke him, we humbly pray, and do Thou, O Prince of the Heavenly Host, by the power of God, cast into Hell, Satan and all the other evil spirits, who wander throughout the world, seeking the ruin of souls. Amen.

Posted by David Griffey at 5:21 PM