The miracle of the Internet

Is not that it makes us smarter.  On the contrary, I sometimes think it leads to a deplorable intellectual laziness on the part of those who look to the net for learning.  On the other hand, it has its benefits.  Chief of these is the ability to track down just about any tidbit of information on the most obscure subject you could ever think.

When I turned five years old, my family moved into town from living out in the country.  That house, which was built almost from the foundation by my Dad, was the only home I had known.  So I was sad to be in this new place next to a nest of kids who made Jack's clan on Lord of the Flies look tame by comparison.  I was also mortified to find out that my Mom had gotten rid of several of my toys, including two of my favorites: a toy highway that you could build for Hot Wheel cars, and an aluminum castle set with figures. I remember playing with the latter in the hallway while my Dad continued to labor on the house.  Gone.  They were just gone.

Well I was researching some information pertaining to Medieval Europe, and lo and behold, my mind began to wander as it is wont to do.  This lost toy set suddenly appeared in my mind's eye, and I decided to see if I might be able to find it somewhere in Cyberspace.  And there it was: 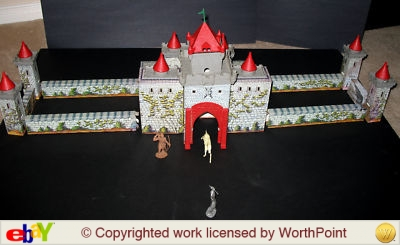 Or at least I think.  Those were many moons ago, and quite frankly, I have only the faintest wisps of memory when it comes to its appearance.  But the picture does ring a bell, especially the red towers, and it seems to be of aluminum, which would be consistent with what I do know.  I don't know.  Maybe it's just a similar set.  But even similar, I can't help but get swept up in the memories and remember playing in that hall so many ages ago, when my troubles were so far in the future, and times were happier.
Posted by David Griffey at 1:20 PM